Amitabh Bachchan, As He Once Was Vs As He Is Now. See His Post 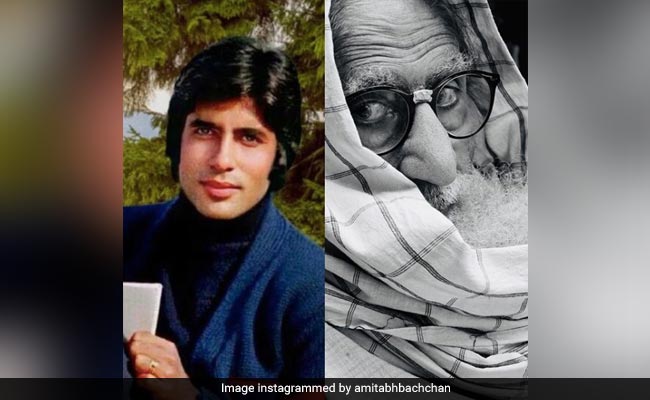 Amitabh Bachchan's throwback game is getting stronger, by the day. The 77-year-old actor, dropped another throwback picture on his Instagram profile, on Thursday, and took us back in time. In a then vs now mood, Amitabh Bachchan shared a picture collage of himself from his 1976 film Kabhie Kabhie, and a snippet of his look from his upcoming film Gulabo Sitabo. Sharing the picture, Big B wrote about the evergreen song Kabhi Kabhi Mere Dil Mein from Kabhie Kabhie. "Srinagar, Kashmir.. Kabhie Kabhie.. writing the verse for the song Kabhi Kabhi Mere Dil Mein Khayaal Aata Hai," he wrote. Referring to his upcoming film Gulabo Sitabo, Big B further added, "Lucknow, month of May.. 44 years later (1976 to 2020), Gulabo Sitabo and song playing Ban Ke Madaari Ka Bandar. Kya the aur kya bana diya aab." Take a look:

Directed by Yash Chopra, Kabhie Kabhie traces the life of Amit Malhotra, played by Amitabh Bachchan, and Pooja Khanna, played by Raakhee Gulzar, who fall in love. But, Pooja gets married to Vijay Khanna, played by Shashi Kapoor, while Amit gets married to Anju Malhotra, played by Waheeda Rehman. Years later, when Pooja and Vijay's son falls in love with Anjali's daughter, it unites the old flames as friends. Produced by Yash Chopra, the film received several awards and accolades, post its release in 1976. Sahir Ludhianvi received the Filmfare Award for the best lyricist for Kabhi Kabhi Mere Dil Mein. Kabhie Kabhie also starred Rishi Kapoor and Neetu Kapoor in pivotal roles.

Meanwhile, Amitabh Bachchan's upcoming release, Gulabo Sitabo, stars Big B in the role of Mirza, a grumpy landlord, and Ayushmann Khurrana in the role of Baankey, a stubborn tenant, who engage in clashes regarding their day-to-day activities. Take a look at the trailer here: