Bhuj: The Pride Of India is slated to open in theatres on August 14 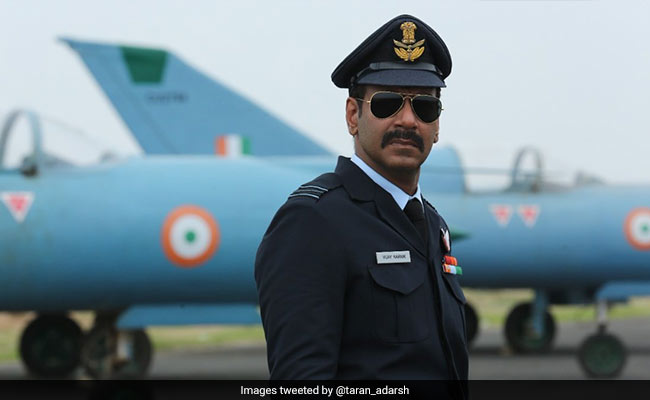 Ajay Devgn on the first poster of Bhuj: The Pride Of India. (Image courtesy: taran_adarsh )

The first poster of Ajay Devgn's Bhuj: The Pride Of India droped on the Internet on Thursday and the actor looks impressive as Squadron Leader Vijay Karnik. Mr Karnik was in-charge of the Bhuj airbase during the 1971 Indo-Pak War. Bhuj: The Pride Of India is based on real life events that took place during the war. In the first look poster, Ajay Devgn can be seen dressed as an Air Force Officer. We can also spot an Air Force plane in the backdrop in the poster. Sharing the first look of the film on social media, trade analyst Taran Adarsh wrote: "First look... Ajay Devgn in Bhuj The Pride Of India... Directed by Abhishek Dudhaiya... Aug 14, 2020 release."

Bhuj: The Pride Of India also features Sonakshi Sinha, Parineeti Chopra, Sanjay Dutt, Rana Daggubati and Ammy Virk in pivotal roles. Last year in March, the stars announced their association with the film on social media. Parineeti, who has previously worked with Ajay Devgn in Golmaal Again, shared the news with her fans on Twitter and wrote: ""The most special true story ever."

THE MOST SPECIAL TRUE STORY EVER! @itsBhushanKumar@TSeries@ajaydevgn@AmmyVirk@sonakshisinha@duttsanjay@RanaDaggubatipic.twitter.com/Eg7gR20DQv

Sonakshi Sinha, who will play the role of social worker Sunderben Jetha Madharparya in Bhuj: The Pride Of India, shared a collage featuring the film's cast and wrote: "Proud to announce my next film Bhuj: The Pride Of India. Essaying the role of Sunderben Jetha Madharparya, my first portrayal of a real life character, in a film based on a real life incident. Big shoes to fill and I'll give it my best! Wish us luck."

BHUJ: The Pride Of India. Proud to announce this as my next film, with these amazing people. For the first time i get to portray a real life hero - Sunderben Jetha Madharparya, in a real life incident - the 1971 indo-pak war! #bhujtheprideofindia

Ajay, in his post, mentioned how Vijay Karnik convinced 300 women from the nearby village to reconstruct the air-strip during the war so that the Air Force officers could land safely.

Directed by Abhishek Dudhaiya, Bhuj: The Pride Of India is slated to open in theatres on August 14.