Vicky Kaushal shared the poster on Instagram saying, "The seas of fear" 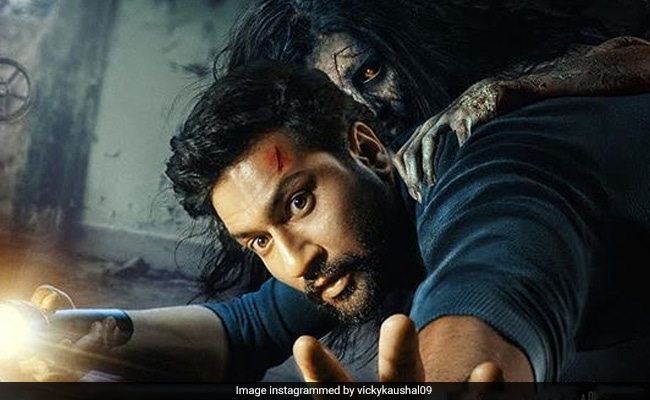 A day ahead of Bhoot: Part One - The Haunted Ship's trailer release, we got to see two new posters of Vicky Kaushal's first ever horror film. Bhoot: Part One features Bhumi Pednekar opposite Vicky Kaushal. The horror film is directed by Bhanu Pratap Singh and jointly produced by Karan Johar, Apoorva Mehta and Shashank Khaitan. Karan Johar-led Dharma Productions' social media pages were updated to a dark theme as the release date is getting nearer for upcoming film Bhoot: Part One. In the posters that were unveiled on Thursday, we see a glimpse of Vicky Kaushal trapped and trying to escape from the titular bhoot.

Vicky Kaushal shared the poster saying, "The seas of fear. Tune back here exactly 24 hours from now, at 10 am tomorrow to set sail into the world of Bhoot."

Vicky's brother Sunny Kaushal, in the comment section, wrote, "I have a floor bed! Thank god I am safe." Meanwhile, Dharma Productions shared the same picture with a rhyming caption, "More than just monsters under the bed, they're about to get in your head!"

Sharing another poster, Vicky Kaushal's co-star Bhumi Pednekar wrote, "Can he fight the darkness that awaits him?" keeping the mystery alive.

Last year, Dharma Productions had shared a few pictures of Vicky Kaushal from Bhoot: Part One on Twitter. The tweet was shared with the release date of November 19, 2019 which was later rescheduled to February 21, this year. Karan Johar had later tweeted, "The tides have changed! Even fear needs precision! And for that we need the time to scare you sufficiently and efficiently! Bhoot has a new date! February 21, 2020 ! Sea you then and try and help Vicky Kaushal escape this haunted ship!"

The tides have changed!!! Even FEAR needs precision! And for that we need the time to scare you sufficiently and efficiently! #BHOOT has a new date !! The 21st of FEBRUARY 2020 ! SEA you then and try and help @vickykaushal09 escape this haunted ship! And some further news ...... pic.twitter.com/iXTsiEuJcW

On the work front, Vicky Kaushal will be starring in Sardar Udham Singh in the titular role. The film is directed by Shoojit Sircar and produced by Ronnie Lahiri and Sheel Kumar. He will also be seen in Karan Johar's Takht and a biopic on Field Marshal Sam Manekshaw.