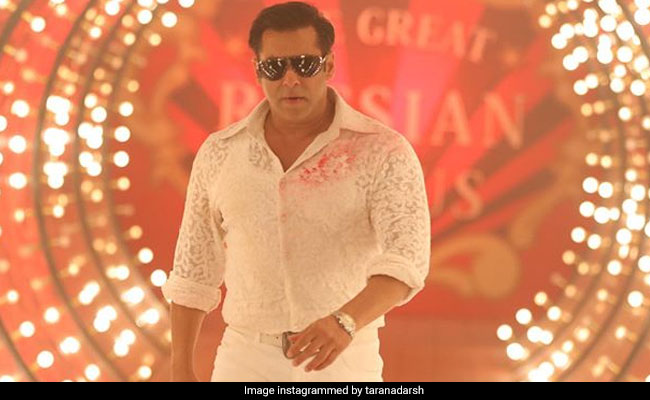 Bharat Box Office: Salman Khan in a still from the film (courtesy taranadarsh)

Salman Khan and Katrina Kaif's new film Bharat had a blockbuster first few days and suddenly witnessed a downward graph on Monday, reported trade analyst Taran Adarsh. During its six-day stay in theatres so far, Bharat has recorded a score of Rs 159.30 crore with Monday contributing Rs 9.20 crore. "Bharat dips, after a long, rich weekend... Will have to speed up on remaining weekdays [Tue to Thu] and also in Weekend 2... Now second highest grosser of 2019, after crossing lifetime biz of Kesari and Total Dhamaal in 6 days." Bharat is now only second to Uri: The Surgical Strike on Bollywood's list of 2019's highest earning films. Kesari, Total Dhamaal and Gully Boy take up the remaining spots.

Taran Adarsh, who also provided a day-wise break-up of Bharat added that while Salman and Katrina's film has to improve its performance over the week for better numbers, the upcoming India vs Pakistan World Cup match will leave a huge impact on Bharat's box office scores. "The crucial World Cup cricket match [#INDvPAK #CWC19] will make a big dent in biz on coming Sun [16 June]."

#Bharat dips, after a long, rich weekend... Will have to speed up on remaining weekdays [Tue to Thu] and also in Weekend 2... Now second highest grosser of 2019, after crossing *lifetime biz* of #Kesari and #TotalDhamaal in 6 days.

Meanwhile, Bharat set off fireworks at the box office on Eid, when it opened to score Rs 42 crore and became Salman Khan's biggest opening film ever.

Directed by Ali Abbas Zafar, Salman Khan reunites with Katrina Kaif in Bharat, which features him in several look changes as the storyline is spread out over six decades. Salman and Katrina co-star with Jackie Shroff, Nora Fatehi and Sunil Grover in the film.