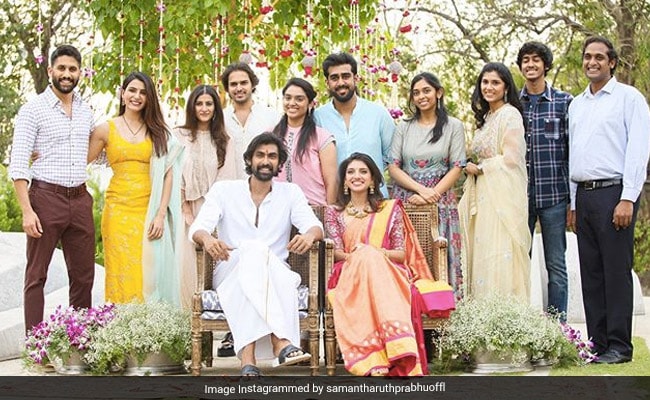 Rana Daggubati And Miheeka Bajaj's engagement is "the best news of 2020" for Samantha Ruth Prabhu, who wished her brother-in-law a day after he and his fiancee got officially engaged in a close-knit ceremony. The Majili actress wished the couple by sharing a happy family photo, which features her husband and Rana Daggubati's cousin, actor Naga Chaitanya, Rana's brother Abhiram and cousin Arjun and a couple of Miheeka Bajaj's family members. All of them can be seen smiling with all their heart while posing for the camera. Posting the photo, Samantha Ruth Prabhu congratulated Rana and Miheeka like this: "Thank you for bringing us the best news of 2020, Rana Daggubati and Miheeka Bajaj... here's to your happily ever after."

Thankyou for bringing us the best news of 2020 @ranadaggubati @miheeka ... here's to your happily ever after @tpt.toast

Rana Daggubati and Miheeka Bajaj, who is an interior designer, made their engagement official yesterday by posting a couple of adorable pictures of themselves on social media. The Baahubali star shared a heartwarming photo, in which he could be seen dressed in a traditional white outfit while Miheeka could be seen wearing an orange and yellow saree. "And it's official!" he captioned the photo.

Miheeka also shared a set of pictures featuring herself and Rana from the ceremony. "To the beginning of forever," she captioned one of the photos while sharing another, she wrote: "My happy place."

Rana Daggubati and Miheeka announced their engagement last week. The actor shared a cute picture of themselves with this short yet sweet caption: "And she said yes!" Check out the photo here: