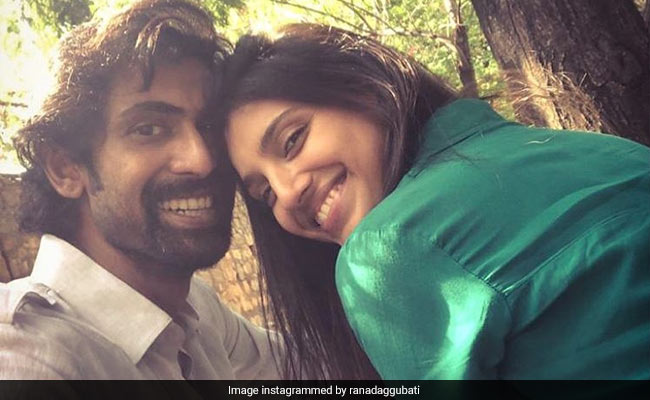 Actor Rana Daggubati, best known for playing the mighty Bhallala Deva in the Baahubali series of films, just confirmed his relationship with Miheeka Bajaj, an entrepreneur, who is from a prominent business family in Hyderabad. On Tuesday evening, Rana Daggubati Instagrammed a loved up photo of himself and Miheeka to simply write: "And she said 'yes'," and hashtagged Miheeka Bajaj's name to the post. Needless to say that following Rana's big reveal, congratulations poured in from his friends on the post, which garnered almost 3,000 comments within an hour. Rana Daggubati's Baahubali co-star Tamannaah Bhatia, Shruti Haasan, Samantha Ruth Prabhu, Kiara Advani, Kriti Kharbanda, Pulkit Samrat, Rhea Kapoor among others showered the couple with a whole lot of love. Anil Kapoor commented: "Congratulations, my Hyderabad son. I am so happy. The best thing to happen to both of you."

For those too curious about who the mystery woman, the love of Rana's life, is, read on. Miheeka Bajaj is the founder of interior design label and event management firm Dew Drop Design Studio. She studied Interior Designing at Chelsea University.

Meet our founder Miheeka Bajaj @miheeka - She has an avid passion for everything vintage, and has the magical ability to weave her client's dreams into reality! In her free time she'll be found playing with her puppy Peaches, reading a book in her garden, whipping up her favorite dark chocolate ice-cream, or exploring the streets of her local cities drawing inspiration to curate unique events! . . #dewdropdesignstudio #interiordecor #interiordesigner #designsbydewdrop #eventplanner #eventplanning #creator #decorbydewdrop #eventdecor #instapost #picoftheday

Miheeka is close friends with Sonam Kapoor's family and is followed by the likes of Anil, Sunita, Rhea, Anshula, Harshvardhan and Sonam on Instagram. Her Instagram friends also include Sagarika Ghatge, Kiara Advani and Masaba Gupta among others. Miheeka is the sister of businessman Samarth Bajaj, who is married to designer Kunal Rawal's sister Sasha. Sonam and Rhea attended Sasha and Samarth's wedding in Oman a few years ago. Miheeka is also part of the Boolanis' circle of friends - Karan Boolani is Rhea Kapoor's long-time boyfriend.

Rana Daggubati, who has always kept his personal life away from the media glare, opened up about dating actress Trisha Krishnan sometime in the past in an episode of Koffee With Karan and said: "We have been friends for very long and dated for a little time. But, I guess, things didn't work out." Talking about Rana Daggubati on the show, Baahubali director SS Rajamouli had said on a lighter note: "Rana is so structured everything has to be broken into structures and pieces for him. His whole life is like 1-10 years, 10-15 years, 15-20 years. Marriage is an aspect, a box to be ticked. That will get ticked. I don't know whether that marriage will last."