The couple also dance to Aankh Maarey, one of the top tracks from Ranveer's upcoming film Simmba. 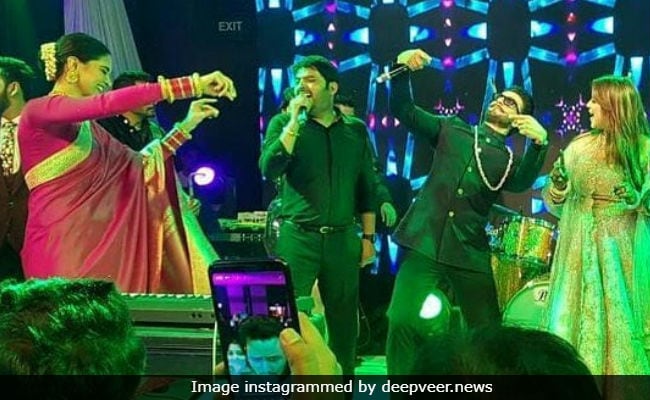 Deepika Padukone and Ranveer Singh were the life and soul at Kapil Sharma and Ginni Chatrath's wedding reception in Mumbai on Monday night. If Deepika and Ranveer's red carpet entry wasn't enough to bowl you over then wait till you see the couple romancing on the dance floor at the reception. Ranveer just couldn't stay away from Deepika and the couple also dance to Aankh Maarey, one of the top tracks from Ranveer's upcoming film Simmba. Deepika and Ranveer had a gala time with Kapil and Ginni, who were also in the midst of all the fun at the party.

Here are inside pictures and videos from Kapil Sharma and Ginni Chatrath's Mumbai reception:

In one of the promos of Kapil Sharma's upcoming show The Kapil Sharma Show, artiste Chandan Prabhakar and Ranveer, who was promoting Simmba, can be seen teasing Kapil by calling him 'Deepika's brother.' The comedian had previously said he had a crush on the Piku actress. Take a look at the teaser here:

Kapil Sharma married longtime girlfriend Ginni Chatrath in Jalandhar on December 12. A reception was hosted for the newlyweds in Amritsar (Kapil's hometown). Last night, Kapil formally introduced Ginni to his colleagues from the film and television industries. Apart from Deepika Padukone and Ranveer Singh, Bollywood celebs such as Rekha, Kartik Aaryan, Richa Chadha and Jeetendra among others turned up to congratulate the couple.

Kapil Sharma is all set to return on the small screen nine months after he show was taken off air after airing a few episodes. The Kapil Sharma Show, also starring Krushna Abhishek, Sumona Chakravarti and Kiku Sharda, will go on air from December 29.