Bell Bottom Teaser: Akshay Kumar Onboard A Journey Of "Throwback To The 80s" 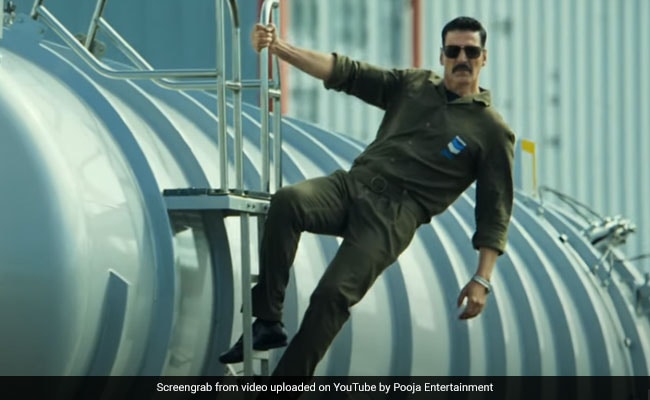 Bell Bottom Teaser: A still from the video. (courtesy YouTube)

Bell Bottom teaser dropped on social media on Monday morning and it looks intriguing. The teaser begins with a video clip of the film's lead actor Akshay Kumar, who stars as a RAW agent in Bell Bottom. The teaser has planes in the backdrop in almost every frame. The peppy music and Akshay Kumar's swag gives the teaser an edge. The makers of Bell Bottom also announced the film's release date. Bell Bottom will open in theatres on April 2,2021. Pooja Entertainment, the production house which is backing the film, described the teaser with these words on YouTube: "Shot in the highlands of Scotland, Pooja Entertainment's Bell Bottom has Akshay Kumar in the lead playing a RAW agent on the trail of a mystery and the film's retro theme brings back the Eighties."

Akshay Kumar and team Bell Bottom shot the film during the coronavirus pandemic in Glasgow and London. Sharing a picture after the film's wrap-up, Akshay Kumar wrote: "Mission accomplished! After a long but fruitful schedule, grateful to have shot and completed #Bellbottom during the pandemic. Now it's time to head back #JetSetGo."

Bell Bottom is the first Bollywood film to shoot at an international location since productions were stopped because of the lockdown. Other than Akshay Kumar, the film also stars Vaani Kapoor, Huma Qureshi and Lara Dutta. Bell Bottom has been co-produced by Vashu Bhagnani, Jackky Bhagnani, Deepshikha Deshmukh, Monisha Advani, Madhu Bhojwani and Nikkhil Advani.