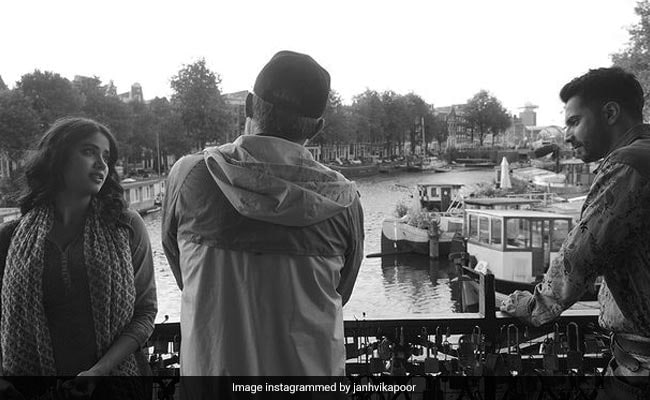 Janhvi Kapoor, who was busy shooting for her next film Bawaal with Varun Dhawan, has shared several behind-the-scene pictures from the sets, announcing the wrap of the film. The actress shared monochrome pictures and wrote a long note describing her magical journey. She also revealed that she was praying "obsessively" to get the film. In a note,  she also thanked her co-star Varun Dhawan for always looking out for her. She wrote, "From stalking Nitesh sir and Sajid sir to make sure i get this film, to praying obsessively that it happens, to pinching myself everyday that I'm actually shooting for it, to having finally wrapped it. I still can't believe that I've been lucky enough to be a part of this wholesome, heartfelt world that Nitesh sir has created."

She added, "I've learnt so much from you sir, so much about films and making movies with love but more about the value in being a person that leads their life with such dignity and honest values. And Varun, I can say thank you for always looking out for me and all those generic things that hold true but what I really want to say is that although we disagree and annoy each other more often than not, Nisha will always be on Ajjus team and always root for u and also find restaurants that have salmon tartare or grilled chicken for u." She signed off by saying, "I can write an essay on everyone in our team who's made this film so special for me but I think there's a word limit... but basically I'll miss you all and thank you for making the last three months feel like magic and now.. back to reality! #Bawaal."

Amid her busy schedule, Janhvi Kapoor always manages to take a break and entertain her Insta family. On Wednesday, she shared a hilarious video in which she can be seen recreating Tejasswi Prakash's Naagin 6 dialogue. Sharing the post, she captioned it as, "Jab midnight cravings wali walk ke beech koi tumhe pakad le". Check out the post below:

Meanwhile, Janhvi Kapoor is gearing up for the release of GoodLuck Jerry. Helmed by Sidharth Sengupta, the movie is slated to release on Disney+Hotstar on July 29. Also, she has Mili and Mr And Mrs Mahi.