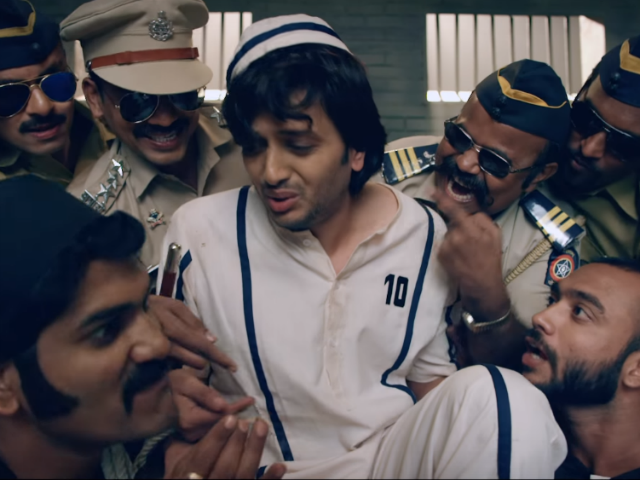 Bank Chor: A still from the song Lag Gayi Tashreef

New Delhi: The first song of Bank Chor, starring Riteish Deshmukh, Rhea Chakraborty and Vivek Oberoi is finally out. The song, titled Lag Gayi Tashreef matches with the madness of the hilarious movie trailer, which was released last month. The three-and-a-half minute clip of the song has been set up in a jail cell. The song features the three bank chors Champak aka Riteish, Genda and Gulab and shows them being tortured throughout the video. Lag Gayi Tashreef has been voiced by Rochak Kohli. The lyrics of the song have been written by Adheesh Verma. Bank Chor has been directed by Bumpy and produced by Y-Films' Ashish Patil and YRF's Aditya Chopra.


Riteish Deshmukh has been actively promoting his upcoming film on social media. Recently, the 38-year-old actor stole posters of popular Bollywood and Hollywood movies and morphed the faces of lead actors with his own.

Check out the series of spoof posters shared by Riteish Deshmukh here:

Bank Chor is scheduled to release in theatres on June 16.

Promoted
Listen to the latest songs, only on JioSaavn.com
Riteish Deshmukh last featured in 2016 movie Banjo, co-starring Nargis Fakhri. After Bank Chor, the Bardaasht actor will feature in Nishikant Kamat's Marathi movie Mauli. He will also be making a film on Maratha warrior Chhatrapati Shivaji, which will be directed by Ravi Jadhav.