A Mira and Misha selfie. It's adorable 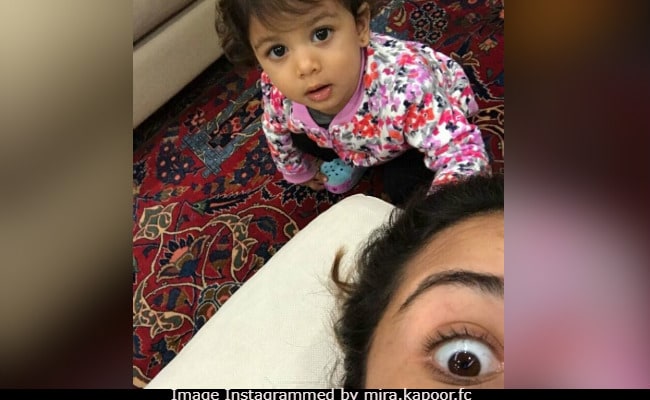 New Delhi: It appears Shahid Kapoor's wife Mira Rajput was in a mood for a selfie when she spotted her one-year-old baby daughter looking into the camera from behind and then, this happened - a one-eyed selfie with Misha. It's adorable. Mira Kapoor's Instagram profile is private and is open to only a select few, so not all were lucky to have witnessed her Instagram story first-hand. But fan-clubs quickly shared this cute snap of her story on social media and the photo doing rounds on the Internet already. Both mother and daughter made certain adjustments to fit into the frame - while Mira almost chopped herself out, Misha, dressed in pink and white, looked cute as a button as she sat down on the floor to include her full self in the selfie.

Most of the comments on the photo also point to the cuteness quotient of the post - it's off the charts.

Promoted
Listen to the latest songs, only on JioSaavn.com
Misha Kapoor was born to the celebrity couple in August last year, a couple of months from when she started making appearances on Shahid's Instagram. A little closer to celebrating her first birthday, Misha also started accompanying her mother to shopping trips and lunch dates, and is often spotted picking Shahid up from the gym. Misha's travel diaries already have entries from New York and London - both places visited this year. Oh, she's also a huge fan of cake and loves lollypop treats. We know all of this from Shahid Kapoor's Instagram, whose post featuring Misha are the most DAD posts ever. Take a look.

Shahid Kapoor and Mira Rajput feature on the cover of Hello Magazine's November issue - their first magazine cover ever. On the work front, Shahid is looking forward to the release of Sanjay Leela Bhansali's Padmavati, his film with Deepika Padukone and Alauddin Khilji.