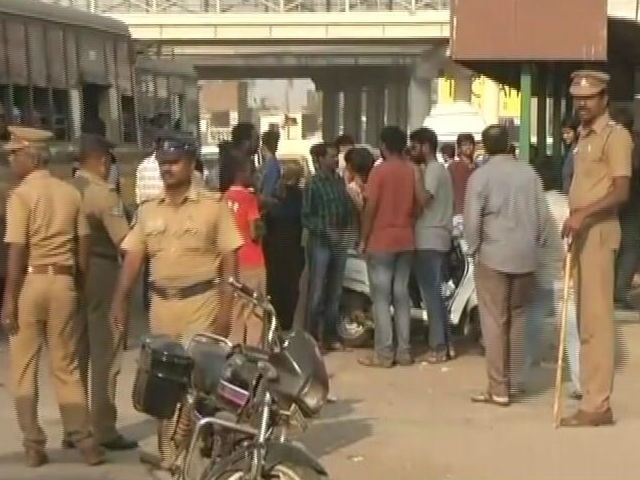 Baahubali 2: Fans wait outside a theatre in Chennai.

New Delhi: Baahubali: The Conclusionsteamrolled its way into theatres across the country this morning - but not entirely unopposed. In Tamil Nadu, disappointed fans found the film's early morning shows cancelled - Andhra Pradesh watched the film at 7.30 am - because of what was explained away first as permission problems. It was then revealed that there are payment issues between the distributors and producers that haven't yet been resolved. Baahubali: The Conclusion released in Tamil Nadu at 11 am, conditionally. Screenings tomorrow are dependent on the outstanding payments being settled. Yesterday, the Madras High Court refused to stay the release of the film - some 650 screens have been booked in Tamil Nadu for Baahubali: The Conclusion, the second part of director S S Rajamouli's magnum opus.

Exact details of what these payment issues are not clear - however, fans in Tamil Nadu have blamed actor Vijay's last film Bairavaa, which was distributed by the same firm as Baahubali: The Conclusion. Losses reportedly incurred by Bairavaa have allegedly prevented the distributors from completing the payment for the rights to Baahubali - none of this has been confirmed.

Promoted
Listen to the latest songs, only on JioSaavn.com
This isn't Baahubali: The Conclusion's first roadblock. Earlier this month, actor Sathyaraj, who plays the crucial role of Katappa, was forced to apologise for comments he had made on the Cauvery water issue nine years ago, to appease pro-Kannada outfits that were threatening to block the film in Karnataka.

Baahubali: The Conclusion, one of this year's mega movies, is directed by S S Rajamouli and stars Prabhas, Rana Daggubati, Ramya Krishnan, Anushka Shetty and Tamannaah Bhatia, apart from Sathyaraj.