Baahubali 2: Karan Johar Is 'Honoured' To Work With SS Rajamouli, 'Movie Man Of The Decade' 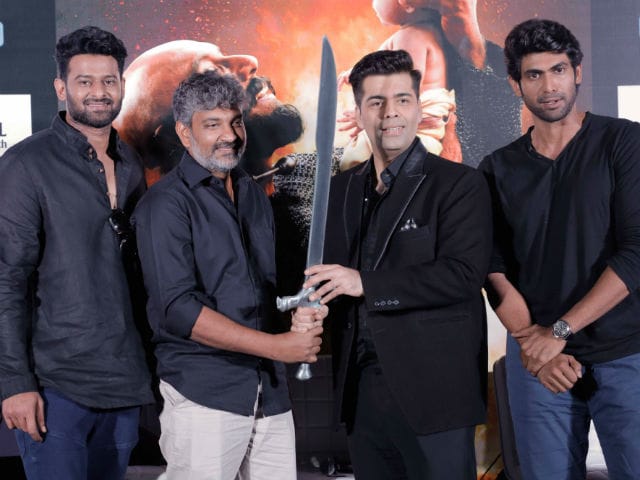 Karan Johar with Rajamouli, Prabhas and Rana Daggubati in Mumbai

With the movie man of the decade!!!! @ssrajamouli ...it's an honour to collaborate with his genius!! Truly the BEST director of our time! pic.twitter.com/08f4oRnonS

"Everyone wants to know why Katappa killed Baahubali and today the answer has been revealed. This film will go down in the history of our industry," a film distributor in Bengal told Box Office India. Days before its release, Baahubali: The Conclusion, which is made under a budget of Rs 500 crore, made a pre-release business of Rs 450 crore through its satellite and distribution rights. It is undoubtedly the most-anticipated films of the year.

Promoted
Listen to the latest songs, only on JioSaavn.com
Trade analyst Taran Adarsh called Rajamouli a 'master storyteller.' In a series of Twitter posts, he wrote, "Rajamouli proves he's a master storyteller, the Big Boss, Baahubali 2 is sure to vanquish previous BO records and set new ones."

Baahubali: The Conclusion released across 8,000 screens and all the shows were declared house full. Box Office India reports that it is the 'first film in history to cross the 100 crore mark on Day 1.'

Baahubali: The Conclusion Is Already An 'Epic Blockbuster'. Details Here