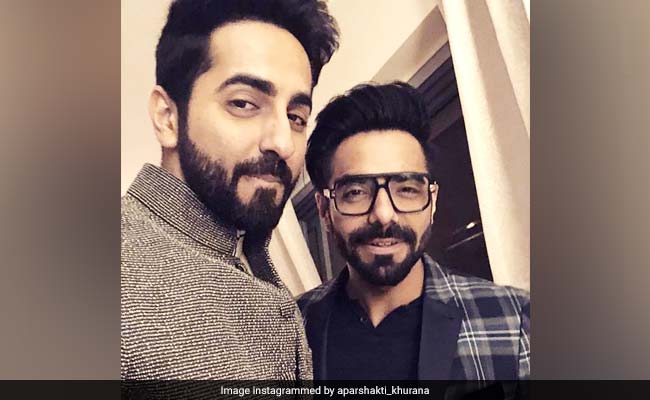 Aparshakti posted this picture of himself with Ayushmann Khurrana. (Image courtesy: Instagram)

Actor Aparshakti Khurana believes the many filmgoers are still oblivious to one key fact of his life -that he is the brother of Bollywood star Ayushmann Khurrana. The 31-year-old actor, who started his career as a radio jockey and later became an anchor on Indian television, made a successful switch to films with 2016 blockbuster Dangal, featuring Aamir Khan, Fatima Sana Shaikh, Zaira Wasim and Sanya Malhotra. He followed up with films like Badrinath Ki Dulhania, Stree and most recently Luka Chuppi. Unlike his big brother Ayushmann, who made a debut as a lead hero with Vicky Donor in 2012, Aparshakti has mostly played supporting parts in the films, but he is fine with it.

"Whenever I meet people, they call me Bittu of Stree or Omkar of Dangal. And I believe not many people know that I'm the brother of Ayushmann. When they do get to know that we are brothers, then sometimes they are shocked and sometimes they say, 'Yeah, you sound so similar' or 'you look similar'. I think it happens also because we both share different space. His space is completely different than mine. I have had a different journey than he had," the actor told PTI.

Aparshakti says that his career trajectory is also not similar to other Bollywood star kids or brothers, who have almost always been launched as a lead. "My journey is different from other star brothers, kids or sisters. I think that is one of the main reasons that people don't question me on this. So far, the media and the audiences have not really roped me into the ambit of nepotism. No one has really come up and said that I have been launched by someone. I'm still playing the friend of a film's hero. No star kid has ever done this role but I have done it in five films," he said.

The actor says he does not believe in planning anything and he just goes with his gut when it comes to making decisions. "There was a time in my school and college days when I really used to plan and they never shaped up, both at the personal and professional front. And I think whenever you plan things and they don't happen, then you feel heartbroken. I have stopped planning things. I have stopped planning life, be it personal or professional," he says.

"I don't really sit down and think like 'I'll do these things now.' I just do things the way I want to do and the way they come to me," he adds. After Luka Chuppi, the actor will be next seen in Jabariya Jodi, Street Dancer and Kanpuriye.