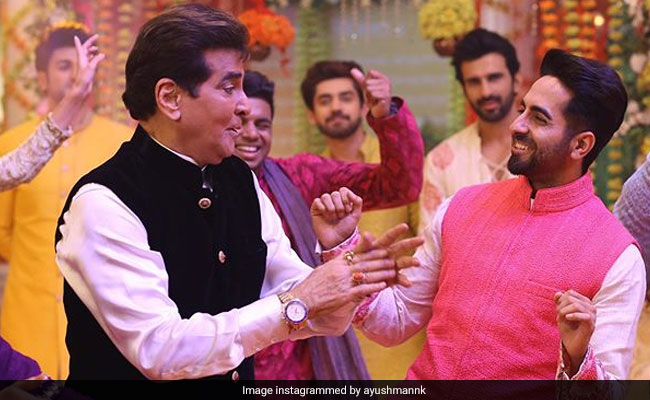 Actor Jeetendra has still got the moves! The veteran star never fails to amaze us and the reason we brought this up today is because we chanced upon a video and a couple of photos of the actor grooving with Ayushmann Khurrana on the sets of Ekta Kapoor's television show Kumkum Bhagya. Ayushmann, who is busy with promotional duties of his upcoming film Dream Girl, appeared on the show as a guest with Jeetendra and Nushrat Bharucha and shared pictures from the sets on his Instagram account. In the photos, Ayushmann can be seen shaking a leg with the senior actor as well as doing aarti with the whole cast of Kumkum Bhagya including Shabir Ahluwalia.

Later, Dream Girl producer Ekta Kapoor shared a video of Ayushmann dancing with Jeetendra to Dhagala Lagali from the film. The video stole the show on the Internet as it received over one lakh likes on Instagram.

Jeetendra and Ayushmann appeared as guests on Kumkum Bhagya for Ganpati special episode.

Now, take a look at the video shared by Ekta Kapoor:

A screenshot of Krishma and Nushrat's comments on Ekta's post.

In Dream Girl, Ayushmann Khurrana plays the role of Lokesh Bisht, who speaks to people as their phone-pal Puja for his living. He also plays female mythological characters such as Radha, Sita and Draupadi for local stage shows. Nushrat Bharucha plays the role of Ayushmann's girlfriend in the film.

Directed by Raaj Shaandilya, the film is slated release on September 13.