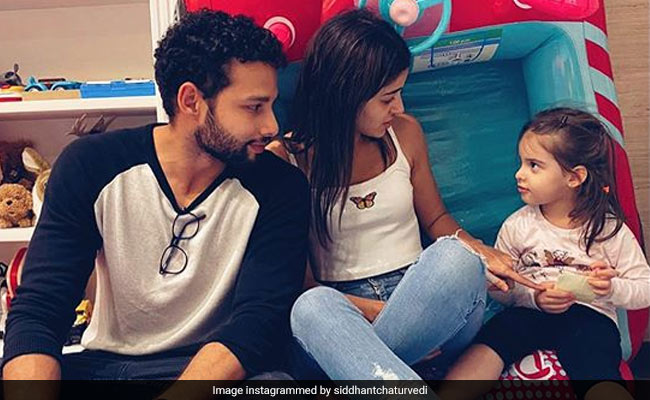 Siddhant Chaturvedi and Ananya Panday have once again found a spot on the list of trends, courtesy a picture of "aunty" Ananya sitting with Karan Johar's daughter Roohi, exclusively shared by the Gully Boy actor. Siddhant, who trended big time on social media last month for his savage response to Ananya Panday's nepotism comments, shared a picture from the birthday celebrations of Karan Johar's twins - Roohi and Yash - on Instagram, in which Roohi can be seen listening to one of the actress' "cheesy bed time stories" with Siddhant sitting next to them. However, it's not the picture but the caption that grabbed the attention of netizens. Sharing the photograph, Siddhant called the actress "annie aunty" and wrote: "Roohi listening to one of Annie aunty's cheesy bed time stories, while Yash saves inflated Iron-man from the evil ceiling. Happy birthday, Roohi and Yash!"

"Aunty...," wrote Ananya in the comments section and added a crying emoticon.

A post shared by Siddhant Chaturvedi (@siddhantchaturvedi) on Feb 7, 2020 at 6:52am PST

The actress also shared a few pictures from the birthday party:

Earlier in January, Ananya and Siddhant featured in headlines for their interview with film critic Rajeev Masand on his talk show The Newcomers Roundtable 2019. During the interview, Ananya presented her views on nepotism and said: "I've always wanted to be an actor. This has been my dream as well and I feel like just because my dad is an actor, I'm not going to say no to an opportunity to act. My dad has never been in a Dharma film, he never went on Koffee With Karan (Karan Johar's chat show). So, you know it isn't as easy as everyone says it is. Everyone has their own journey."

However, Siddhant was quick to respond to Ananya's comments. He made a direct reference to celebrity kids and said: "Sabka struggle alag hota hai. Difference yahi hai ki jahaan humare sapne poore hote hain, wahan inka struggle shuru hota hai (Everybody has their own struggle. The difference is where our dreams come true, their struggle begins)."

On the work front, Ananya Panday made her Bollywood debut with Karan Johar's Student Of The Year 2 while Siddhant ventured into Hindi films with Zoya Akhtar's Gully Boy. The duo will be seen together in a Shakun Batra-directed film.