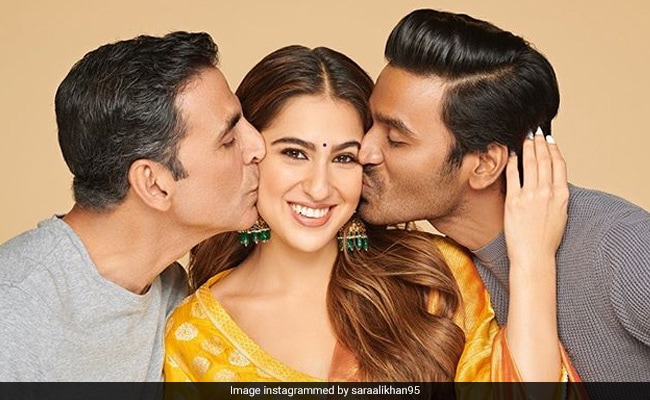 Aanand L Rai's upcoming comedy-drama Atrangi Re occupied a spot on Twitter's trends list as it went on floors on Thursday. Bollywood trade analyst Taran Adarsh shared a picture of the puja from the sets of the film on Twitter and wrote, "Aanand L Rai's new film Atrangi Re. Filming begins today." He also added that the film will release on Valentine's Day next year. The film has been written by Himanshu Sharma and presented by T-Series, Colour Yellow Productions and Cape Of Good Films. AR Rahman will be composing the music for the film. Take a look at Taran Adarsh's tweet here:

A few weeks ago, the film's lead actress Sara Ali Khan posted an adorable picture with Akshay Kumar and Dhanush. She announced her association with the film. Sharing the picture, the 24-year-old actress wrote, "I can't believe my luck. My next film Atrangi Re. Blessed to be working with Aanand L Rai Sir in an AR Rahman musical and so thankful to have Akshay Kumar Sir join hands with the extremely talented and incredibly humble Dhanush and myself." She also added, "Can't wait to start and can't wait to come. Again, on Valentine's Day, February 14, 2021."

I can't believe my luck My next film: ATRANGI RE Blessed to be working with @aanandlrai sir In an @arrahman musical And so thankful to have @akshaykumar sir join hands with the extremely talented and incredibly humble @dhanushkraja and myself Presented by @itsbhushankumar's @TSeries, @cypplofficial & #capeofgoodfilms And written by Himanshu Sharma Sir CANNOT WAIT TO START And cannot wait to come Again, on Valentine's Day 14th February 2021

Dhanush posted a video on his Instagram profile last month announcing his association with the film. The 36-year-old actor made his debut in Bollywood with Aanand L Rai's 2013 romatic-drama Raanjhanaa. Atrangi Re marks his second collaboration with Aanand L Rai.

Atrangi Re is Akshay Kumar's first film with Sara Ali Khan and Dhanush. Directed by Aanand L Rai and produced by Bhushan Kumar, Colour Yellow Productions and Cape Of Good Films, the film is slated to release on February 14, 2021.