At Time 100 Gala, Deepika Padukone Talks About Pay Gap And Battle With Depression 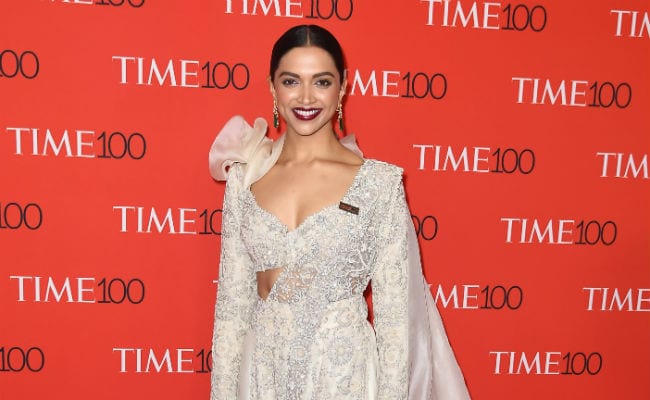 New Delhi: Deepika Padukone, believed to be among the highest paid actors in Bollywood (certainly the highest paid female star), addressed pay disparity between genders in her speech at the Time 100 Gala in New York. Deepika said that it's okay to fight for higher remuneration if you believe you deserve the amount. Deepika, who is on Time magazine's 2018 list of 100 Most Influential People, said: "You can feel a sense of 'am I stepping over the line, do I deserve it?' But if you believe you deserve it, then you do." Deepika told Time magazine: "For years, we've been made to feel we should be okay with settling for less, with sometimes a promise of getting something more later on. But I think you should get what you think you deserve. It's okay to fight for it, and it's okay to feel uncomfortable initially, because that's just the way we've been made to feel for so long." Deepika Padukone confirmed a while ago that she was paid more than Ranveer Singh and Shahid Kapoor in "Padmaavat." Though she did not reveal the exact amount, it is believed she was her salary for the film, in which she played the central role of Rani Padmavati of Chittor, was Rs 11 crore. Deepika's fee was also higher than Amitabh Bachchan's pay cheque in Shoojit Sircar's Piku.

At the Time 100 Gala, Deepika also spoke about her battle with depression. "February 15, 2014, I remember waking up that morning with a strange pittish feeling in my stomach. I had no idea what I was feeling. Life all of a sudden just felt meaningless and there were days when I just wanted to give up. And couple of weeks later I was diagnosed with clinical depression," she said - Deepika's words will be familiar to those who read her account and watched her interviews detailing her struggle with mental illness in 2015.

"Four years on, I stand here in front of all of you with a slightly better understanding, I think, of life and my feelings and the person that I am, but I feel like more importantly, I think all of you will agree with me when I say that we're going through some pretty challenging times all around the world," 32-year-old actress said at the Time 100 Gala.


Promoted
Listen to the latest songs, only on JioSaavn.com
Deepika Padukone runs a foundation called Live Love Laugh which aims to reduce the stigma around mental health. "And for some of us I think who do think of giving up once in a while, I want you to know that we're all in this together, and most importantly that there is hope, because in the words of Stephen Fry, 'It'll be sunny one day'," Deepika said at the Time 100 Gala.

Deepika Padukone, one of three Indians on the Time 100 list with cricketer Virat Kohli and Ola co-founder Bhavish Aggarwal, wore an Anamika Khanna saree-gown for the Time 100 Gala.