Many of Nayanthara's co-stars were present at the wedding 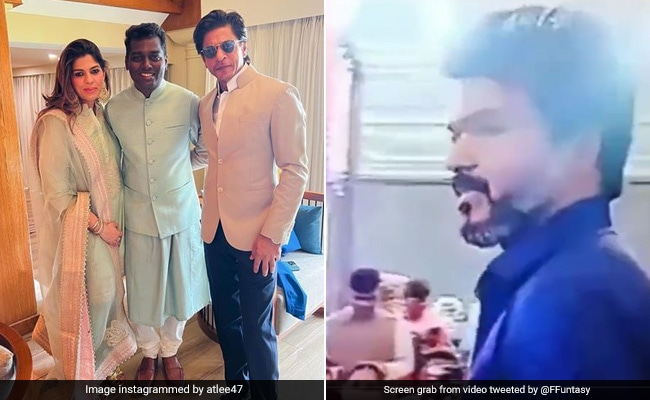 Nayanthara and Vignesh Shivan's wedding is a star-studded affair, what with some of the biggest names from the Indian film industry in attendance. Rajinikanth led the celeb roll call. Beast star Vijay was also pictured arriving at the wedding. Team Jawan (Nayanthara's next project) was represented by the film's lead actor Shah Rukh Khan and filmmaker Atlee. Atlee shared a picture of himself with SRK and the superstar's manager Pooja Dadlani. "Darling Nayan and Vignesh Shivan's wedding diaries. With Shah Rukh Khan sir chief and Pooja Dadlani." The picture was later re-posted by Pooja Dadlani on her Instagram story.

Here's a video of Vijay arriving at the wedding, shared by a fan club on Twitter:

Shah Rukh Khan's manager shared a few clicks of SRK from the wedding venue and she wrote: "For Nayanthara's Special Day," adding a bride and a ring emoji along with the post.

Nayanthara and Vignesh Shivan met on the sets of 2015 film Naanum Rowdydhaan, which Vignesh directed and it featured Nayanthara in the lead role. They fell in love soon after that. In 2019 too, Nayanthara addressed Vignesh as her "fiance" at an event, which triggered reports of their engagement.

In terms of work, Nayanthara was seen in Kaathu Vaakula Rendu Kaadhal, co-starring Vijay Sethupathi and Samantha Ruth Prabhu. The film was directed by Vignesh Shivan.