From Oscars to Cannes, Priyanka Chopra has walked the red carpet for all the big events 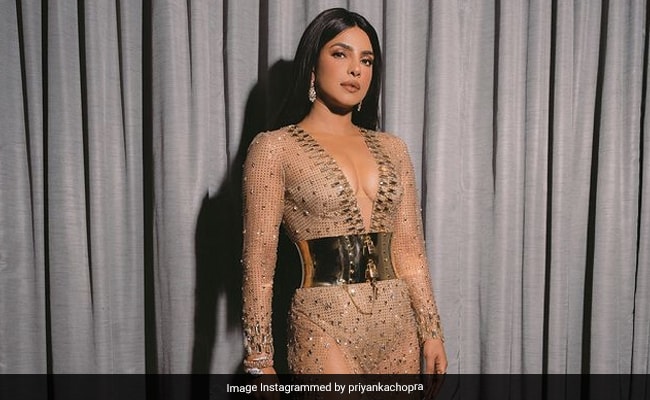 Actress Priyanka Chopra Jonas set the Internet on fire when she appeared in a Dolce and Gabbana couture gown for the 2021 Billboard Music Awards. The outfit was inspired by the fall 2007 collection. The beige number was paired with a custom gold-toned belt and some Bulgari jewels. The stunning accessories included some drop earrings, jewel-encrusted rings and chunky bracelets. The actress kept the makeup dewy and added bronze highlights to accentuate her stunning features. For her lips, Priyanka picked a bold brown lipstick. The subtle colour of the thigh-high slit gown brought out the sheen of the embellishment that ran all along the length of the ensemble.

As the Internet went gaga over the actress' ravishing avatar, we thought that this would be a good time to revisit some of Priyanka's iconic red carpet looks over the past few years.

Most recently for BAFTA 2021, the actress is seen in an embellished jacket with an open front. She paired this with silky white trousers from the studios of Pertegaz. For footwear, she went with black pumps by Christian Louboutin and her jewellery was yet again by Bulgari.

Priyanka knows how to get the world to sit up and take notice of her. She proved this with her January 2020 appearance at the Grammy Awards. She chose to wear a Ralph and Russo couture gown which featured a plunging neckline that went up to her navel. The adventurous look was paired with her signature sleek hair, diamond jewellery and a bronze makeup look.

Priyanka is one actress who can pull off a feminine look as elegantly as she can pull off an edgy ensemble. And she gave us the perfect retro Hollywood vibe in a Cristina Ottaviano gown with a train. She paired the gown with side-swept hair in soft curls and added an exquisite diamond necklace.

For her Cannes 2019 outing, Priyanka chose to wear a wedding dress from Georges Hobeika's 2020 bridal collection. She picked some exquisite diamond jewellery and dewy makeup to elevate the look.

Priyanka is always up for a challenge. For the 2019 Met Gala, the fashionista opted for a Dior creation. As per the theme ‘Camp: Notes On Fashion', she is seen in a silver lattice cage-style sheer bodice with a high choker neckline, sheer embellished tights and gloves. Her over-the-top makeup, with white eyeliner and red lips, pulled the avant-garde look together.

For the 2019 Billboard Music Awards, Priyanka went with one of her favourite designers Zuhair Murad. The sequined ensemble featured a neckline and was cinched at the waist by a belt. She accentuated the cut of the dress by wearing a studded choker, a dainty chain with a pendant along with a diamond stringed necklace, all from Tiffany & Co.

One of Priyanka Chopra's most iconic looks that made it to every best-dressed list as well as Internet meme pages was her Ralph Lauren look for Met Gala in 2017. The couture trench coat featured a 20 feet long train. Her hair was tied up in a bun and she went with her favourite red lipstick. Did someone say fierce?

Priyanka rocked in a Ralph Lauren gown here. She paired it with wavy tresses, a bold lip and a diamond necklace.

Priyanka made heads turn in Jason Wu number at the 68th Annual Primetime Emmy Awards. The red attire was matched with dewy makeup and side-swept hair in a ponytail.

The actress first caught the global fashion world's attention when she made her Oscar red carpet debut in this iconic Zuhair Murad piece. The white outfit with the sweetheart neckline was an instant hit with fashion lovers.

Tell us which of Priyanka Chopra's iconic red carpet looks is going on your fashion board.