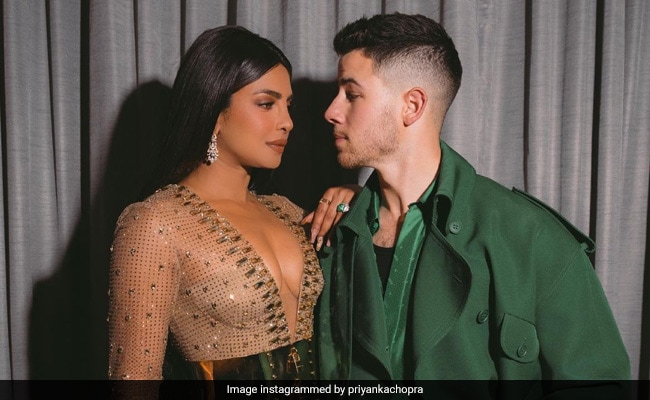 Wow - one word to describe Priyanka Chopra's look on the night of Billboard Music Awards. Sunday night in Los Angeles saw Priyanka Chopra and Nick Jonas walk the red carpet at the Microsoft Theater, the venue for the Billboard Music Awards this year. Priyanka and Nick, known for setting fashion goals on the red carpet, did it again - she in a custom Dolce Gabbana ensemble (inspired by fall 2007 collection) and he in designer pieces from Fendi. Priyanka Chopra was a vision in gold, in her shimmering thigh-high slit gown with a plunging neck line. She added some more bling to her embellished gown with an iconic belt from Dolce Gabbana couture, previously worn by Naomi Campbell and Beyonce.

Priyanka Chopra completed her look with Bulgari jewels, a sleek hairdo and her boss-lady persona. Meanwhile, Nick Jonas' look for the award show made Priyanka drool, like she confessed in the caption. Nick reacted with the red heart emojis.

Nick Jonas was also joined by the rest of the Jonas Brothers - Kevin and Joe - on the red carpet. The Jonas Brothers and Marshmello performed the song Leave Before You Love Me at the awards, which is their latest collaboration. Last year, the Jonas Brothers won in three categories at the Billboard Music Awards. "So proud of you," Priyanka had written then.

This year's Billboard Music Awards saw performances by artistes such as DJ Khaled, Migos and H.E.R. K-pop band BTS also enthralled fans with their first ever live performance of their new release Butter.

Billboard Music Awards: Padma Lakshmi Presented BTS And It Couldn't Have Been Any Better. Sorry, We Mean 'Butter'