The video also features Aadar Jain and Tara Sutaria, who are rumoured to be dating 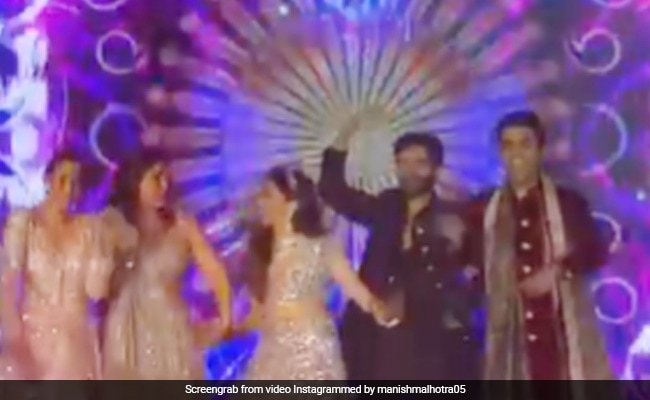 A still from the clip shared by Manish Malhotra. (Image courtesy: manishmalhotra05 )

Our Friday couldn't get any better as we chanced upon an unseen video from Armaan Jain and Anissa Malhotra's wedding reception, which features the newly-wed couple dancing with the Kapoor sisters and Karan Johar. Armaan and Anissa got married on February 3 and hosted a grand reception for their family and friends from the industry on the next day. Weeks after videos of several dance performances from the reception surfaced on the Internet, designer Manish Malhotra shared a brand new clip on Friday, which features Armaan and Anissa dancing to the track Badri Ki Dulhania with Armaan's brother Aadar Jain, cousins Kareena and Karisma Kapoor, filmmaker Karan Johar and Tara Sutaria.

In one of his previous posts, Manish Malhotra gave us a glimpse of Armaan and Anissa's romantic dance performance. The couple wore outfits designed by him at the reception. Take a look:

One of his posts also featured Kareena and Karisma Kapoor's dance performance to the track Bole Chudiya from Karan Johar's 2001 film Kabhi Khushi Kabhie Gham... while another showed Aadar Jain and Tara Sutaria, who are rumoured to be dating, grooving to the track Dil Luteya. In case you haven't seen the videos yet, check them out:

Other than the Kapoor sisters and Karan Johar, Shah Rukh Khan also burned the dance floor at Armaan Jain and Anissa Malhotra's reception. He grooved with wife Gauri and friend Karan to the song Saadi Gali from Tanu Weds Manu. Take a look:

Armaan Jain made his debut in Bollywood with Arif Ali's 2014 film Lekar Hum Deewana Dil, in which he co-starred with Deeksha Seth. He hasn't announced his next project yet.