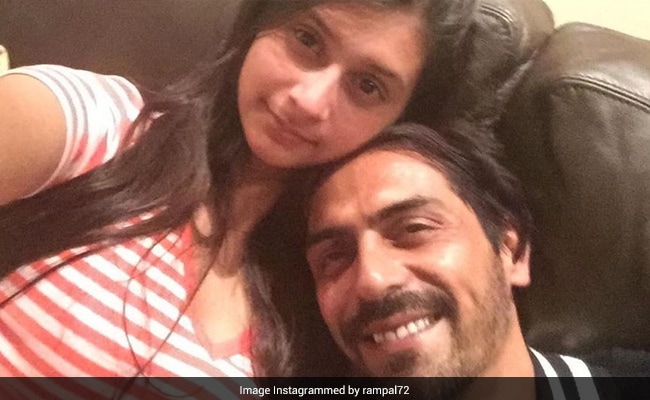 Arjun Rampal spent a happy Sunday between a movie date with son Arik and the announcement of his daughter Mahikaa's International Baccalaureate result, in which she passed with top marks. The 47-year-old actor shared a post congratulating his daughter Mahikaa for scoring well in her exams and wrote, "She is the ultimate rockstar... congratulations on your outstanding results in your IB finals. 7/7 in Science and Math. Incredible. So proud my baby jaan. #mahikaarocks." Mahikaa is the elder of Arjun Rampal's two daughters with his ex-wife Mehr Jesia. Mahikaa's sister is Myra.

In a separate post, Arjun Rampal gave a sneak peek of his movie date with his son Arik. "Watching The Lion King with my Simba....#sundayfunday," Arjun captioned a picture, which showed little Arik along with a TV set playing Jon Favreau-directed version of The Lion King.

She is the ultimate rockstar... congratulations on your outstanding results in ur IB finals @mahikaarampal 7/7 in science and Math. Incredible. Soooooo proud my baby jaan. #mahikaarocks

Watching Lion King with my Simba....#sundayfunday

Arik was born to Arjun Rampal and his girlfriend Gabriella Demetriades in July last year. In two weeks, Arik will celebrate his first birthday.

Arjun Rampal married Mehr Jesia, former Miss India, in 1998 and they announced their separation after 20 years of marriage in May 2018 and they were granted a divorce in 2019. Their daughters Mahikaa and Myra live with Mehr but they frequently feature in Arjun Rampal's social media posts.

Arjun Rampal was last seen in 2019 web-series The Final Call while his last movie was 2018's Paltan, directed by JP Dutta. Arjun Rampal hasn't announced his next project yet.