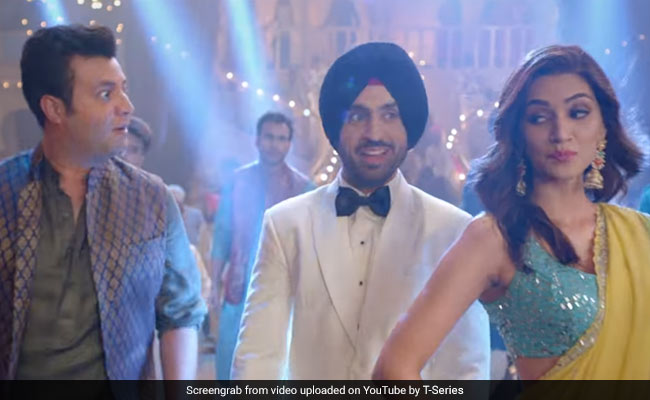 Arjun Patiala's first song Main Deewana Tera just dropped on the Internet and you we assure you that the groovy beats will compel you to hit the dance floor. The song features Dilijit Dosanjh, Kriti Sanon and Varun Sharma. The song has been sung and also written by Guru Randhawa. In the song, we can see Dilijit and Kriti romancing in a typical Bollywood style. Diljit sported a suit whereas Kriti wore a yellow saree and looked gorgeous. Within a few hours of its release, the song has over 2 million views on YouTube as of now. The makers of the song shared the video and described it as the "new party song." Check out the video of Main Deewana Tera:

Arjun Patiala is a comedy film, which is directed by Rohit Jugraj and produced by Dinesh Vijan. The producer was also a part of films such as Irrfan Khan's Hindi Medium and Rajkummar Rao's Stree. Take a look at the trailer of the film, which released last week:

Arjun Patiala is a comedy film that showcases the story of a journalist (played by Kriti Sanon) who falls in love with a cop (played by Diljit Dosanjh). The film also features Ronit Roy and Sunny Leone. It is slated to release on July 26.

In an interview with news agency IANS, Kriti Sanon spoke about Arjun Patiala and said: "I feel it's a completely different kind of a comedy. It's a slightly spoofy kind of a comedy. I don't think that kind of a take on comedy has been done before. It has shaped up pretty well."

On the work front, Diljit Dosanjh will next be seen in Good News, which features Kareena Kapoor, Akshay Kumar and Kiara Advani. Meanwhile, Kriti Sanon has Panipat and Housefull 4 in her pipeline.