Arjun Kapoor, Janhvi, Khushi And Anshula's Family Portrait Is All About Love

"Always stay together," a fan commented on Anshula Kapoor's post 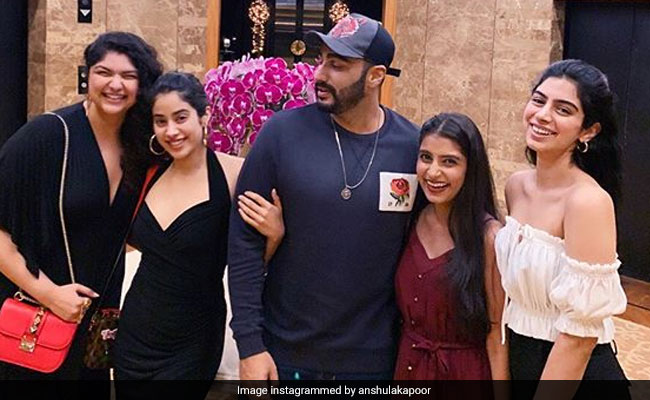 If we had to describe Anshula Kapoor's latest Instagram entry in a word, we would call it "adorable." On Sunday, Anshula posted a perfect family portrait, which features her brother Arjun Kapoor and her sisters - Janhvi and Khushi. The quartet, along with another friend, can be seen smiling with all their hearts as they pose together for the camera. In the throwback photograph, Janhvi and Anshula can be seen twinning in black outfits while Khushi can be seen dressed in a white boat neck top and black trousers. Arjun Kapoor can be seen dressed in blue tee and denims and can be seen wearing a cap. Anshula added a heart emoji to the post.

Janhvi Kapoor and Khushi frequently make appearances on Anshula's Instagram profile and we simply love it when that happens. Take a look at some of the posts here:

Arjun Kapoor and Anshula are film producer Boney Kapoor's kids with his first wife Mona Shourie while Janhvi and Khushi are the filmmaker's kids with late actress Sridevi.

Both Arjun and Janhvi are Bollywood actors. On the work front, Arjun Kapoor was last seen in India's Most Wanted. His upcoming projects include Sandeep Aur Pinky Faraar, opposite Parineeti Chopra and the period drama Panipat.