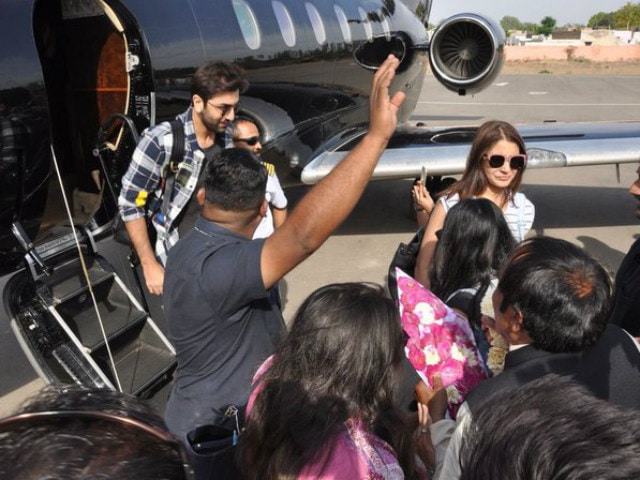 New Delhi: After making a splash in London and Austria, Ae Dil hai Mushkil co-stars Anushka Sharma and Ranbir Kapoor were once again spotted on the sets, this time in Rajasthan, shooting for a song. Social media however, could only manage a few pictures from venue, which also feature actor Fawad Khan with the duo. Fawad plays the role of a DJ in the love saga.

An assortment of a traditionally beautiful Anushka, a suited Ranbir and a casually dressed Fawad feature in the pictures shared on Instagram.

Ranbir, Anushka and Fawad shooting for #AeDilHaiMushkil in Rajasthan

Anushka was photographed in her car:

Anushka, last seen in 2015's Dil Dhadakne Do, will also star in Salman Khan's Eid release Sultan. Ranbir last appeared in 2015's Tamasha while Aishwarya made a comeback with Jazbaa the same year. Fawad, who made his Bollywood debut with 2014 movie Khoobsurat, last starred in new movie Kapoor And Sons. Ae Dil hai Mushkil also stars Aishwarya Rai Bachchan and is slated for a Diwali release this year. Aishwarya also has Umang Kumar's Sarbjit releasing on May 20.

Karan Johar is returning to the director's chair after a gap of three years with this movie. His last venture as a director was 2012 movie Student Of The Year starring Alia Bhatt, Sidharth Malhotra and Varun Dhawan. (Also Read: Fawad Khan's Role in Ae Dil Hai Mushkil 'Not Exactly a Cameo')