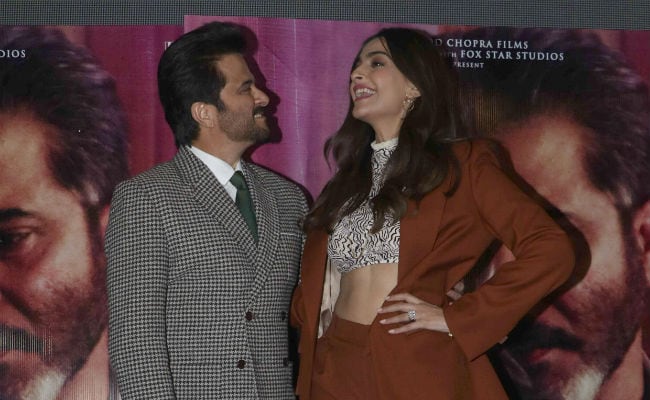 Anil Kapoor said that he would like to cast his daughter Sonam Kapoor in the lead role of his directorial debut (if he makes one), reports news agency IANS. Anil Kapoor and Sonam are sharing screen space for the first time in upcoming movie Ek Ladki Ko Dekha Toh Aisa Laga, the first poster of which was unveiled on Monday, on Anil Kapoor's birthday. Speaking at a media event of Ek Ladki Ko Dekha Toh Aisa Laga in Mumbai, Anil Kapoor added Sonam always 'surprises him as an actor.' He told reporters: "She always surprises me as an actor. When I see her on the set and when I see her onscreen, every time I feel that she has completely different kind of presence on both sides. I think that's a sign of true artiste."

Sonam has featured in Aisha, Khoobsurat and Veere Di Wedding which were produced by her sister Rhea Kapoor through Anil Kapoor Films.

Films-wise it wasn't the best year for Anil Kapoor - both his films Race 3 and Fanney Khan tanked at the box office. However, Anil Kapoor was not pessimistic at all. "I think this year has been beautiful and I feel year 2019 will be even better," he said at the event.

On the other hand, Sonam Kapoor had a fantastic year in terms of her career. Her films PadMan and Veere Di Wedding performed well at the box office. When asked about how she picks her projects, Sonam said: "I never made a conscious decision that I want to do films which are in that space. If I like the script and if my role in the film is good then, I will certainly like to do it."