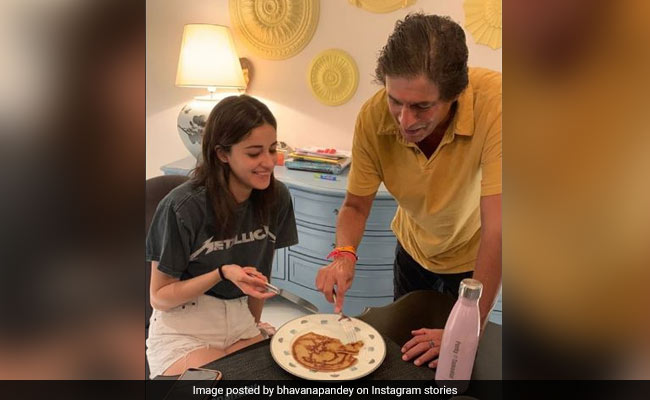 Ananya Panday's mother Bhavana gave us a glimpse of their feast on Wednesday. Ananya's actor father Chunky Panday prepared some oatmeal pancakes and as they were feasting on a healthy meal, Bhavana Panday posted a picture of Ananya and her father. It was prepared by none other than "chef" Chunky Panday, which the trio enjoyed eating together. In the picture, Ananya Panday, 21, could be seen smiling with a knife in her hand as her father stood beside the table with a fork. Bhavana Panday shared the post on her Instagram story and wrote, "Homemade oatmeal pancakes specially prepared by chef Chunky Panday." Here's the post we're talking about: 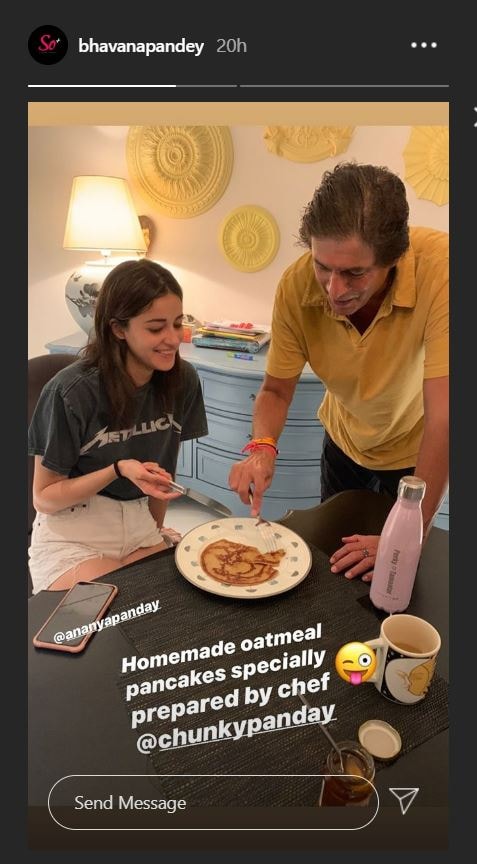 Pictures of Ananya and her father often feature on Bhavana Panday social media account, which also include Ananya's younger sister Rysa, who is 16. Earlier, Bhavana shared a family photograph from the archives, which she captioned with several heart emojis. Ananya, Rysa and their parents were all smiles for the camera. Take a look at this adorable photo:

Here is another throwback picture. Try to find Rysa in this photograph:

@ananyapanday never stopped posing @rysapanday you are also In this picture

Now, this one is fairly recent as compared to the pictures above:

On the work front, Ananya Panday made her debut in Bollywood with Student Of The Year 2, which fetched her the Best Debut award at the 65th edition of Filmfare Awards. She co-starred with Tiger Shroff and Tara Sutaria in the film. Ananya Panday will next be seen in Khaali Peeli opposite Ishaan Khatter. The actress also has Shakun Batra's new film in the pipeline, in which she will be sharing screen space with Siddhant Chaturvedi and Deepika Padukone. Meanwhile, Chunky Panday was last seen in Jawaani Jaaneman as Rocky.