On Tuesday, Rysa turned 16 and Ananya wished her happy birthday with a couple of adorable pictures 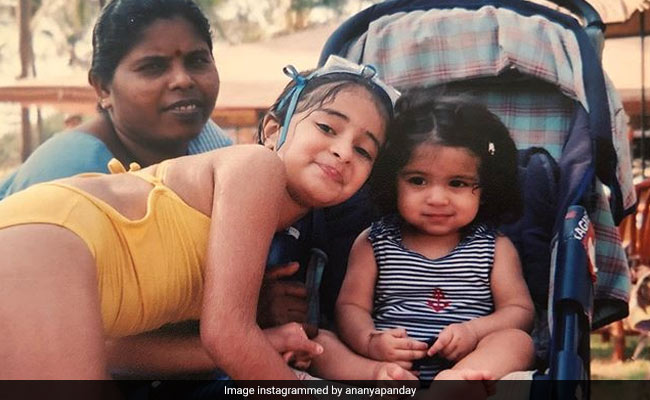 Ananya Panday added more pictures to her throwback album on her sister Rysa Panday's birthday and its absolutely adorable. On Tuesday, Rysa turned 16 and Ananya wished her happy birthday with a couple of cute pictures. The Student Of The Year 2 actress called her sister "Rychu" in her post and wrote, "This brat is finally 16! Happy birthday Rychu. Love you the mostest in the whole entire world." Ananya Panday can be seen taking care of her little sister Rysa in the photo album. In one of the pictures, Ananya can be seen feeding her little sister with a spoon and we are all hearts. Rysa looks like a smaller version of Ananya in these pictures. Take a look:

this brat is finally 16!!! happy bday Rychuuuu - love u the mostest in the whole entire world

In the comment section, their mother Bhavana Panday wrote, "Love you both the mostest." Gully Boy actor Siddhant Chaturvedi commented, "Cute!" with a heart emoji.

Earlier on Women's Day, Ananya Panday shared photographs from the golden days. The post included a picture of Gauri Khan, Bhavana Panday and Maheep Kapoor with their daughters, who are best friends - Suhana Khan, Ananya and Shanaya Kapoor. She accompanied it with several other throwback pictures of her family and friends. Here's the post we're talking about:

Here's to the women in my life whose presence is a constant reminder to be courageous, kind and humble #HappyWomensDay to all the beautiful women

Ananya Panday's throwback album also includes a picture of her father Chunky Panday and mother Bhavana, which she captioned, "My happy place."

Seen this picture yet?

yes!! I was that kid who wore her own face on her T-shirt, struck the most extra poses and took the most obnoxious selfies but also the happiest bcuz I have the best parents happy children's day!

Ananya Panday made her acting debut with Student Of The Year 2. She received Best Debut award at the 65th edition of Filmfare Awards for her performance in the film. Produced by Karan Johar, the film also starred Tiger Shroff and Tara Sutaria.

On the work front, Ananya will be seen in an upcoming film Khaali Peeli alongside Ishaan Khatter. The 21-year-old actress has another film in the pipeline (yet untitled) by filmmaker Shakun Batra co-starring Deepika Padukone and Siddhant Chaturvedi.