Ananya Panday Doesn't Have A Song With Ex-Student Of The Year Alia Bhatt But She Got A Hug. See Pic 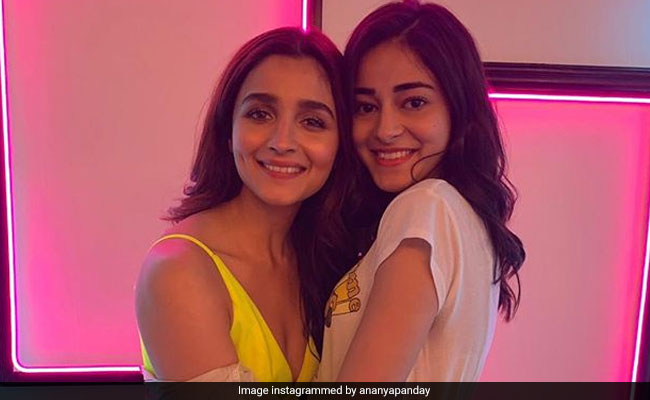 Ananya Panday may not get a song with Alia Bhatt but she got a hug! Ananya Panday, who is all set for her Bollywood debut with Student Of The Year 2, cheered for her "favourite" star Alia Bhatt as the new track the Hook Up Song released on Tuesday. Alia Bhatt makes a special appearance in the song, co-starring with Tiger Shroff. Sharing a photo of herself and Alia Bhatt hugging, Ananya Panday wrote: "'Team Shanaya' for life. The hottest "hook up song" ever, featuring my two favourites - Alia and Tiger!" The photo appears to be from the sets of the Hook Up Song as Alia Bhatt sports one of her looks from the movie - a vibrant, fluorescent green romper designed by Manish Malhotra. Ananya's ear-to-ear smile explains it all.

Alia Bhatt and Ananya Panday have a common connection when it comes to their Bollywood debuts. Back in 2012, Alia Bhatt stepped in to showbiz with Student Of The Year. She adorably played Shanaya - a fashionista, the only child of an affluent family, neglected by her parents and in search of true love. The film also marked the Bollywood debuts of Varun Dhawan and Sidharth Malhotra.

Meanwhile, take a look at the Hook Up Song here.

Student Of The Year 2 also stars Tara Sutaria, who too is making her Bollywood debut with the Punit Malhotra-directed film. Karan Johar, who directed the first part, is producing this sequel, which comes with a fresh batch and a fresh story altogether.

Student Of The Year 2 hits screens on May 10.