Amitabh Bachchan's Jhund Will Release On This Date

Amitabh Bachchan shared a poster of his upcoming film Jhund 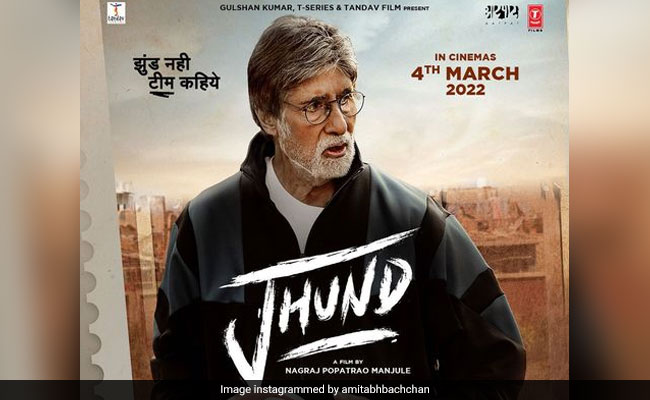 On Wednesday, Amitabh Bachchan shared a new release date for his upcoming film, Jhund on his Instagram handle. In the poster shared by Amitabh Bachchan, the actor can be seen dressed in a casual outfit as he holds a football. Sharing the post, Amitabh wrote: "Iss toli se muqaabla karne ke liye raho taiyaar!(Be ready to fight with this group) Humari team aa rahi hai (our team is coming to come) #Jhund, releasing on 4th March, 2022 in cinemas near you." Jhund is a sports film based on the life of Vijay Barse, the founder of NGO Slum Soccer. Jhund stars Akash Thosar and Rinku Rajguru in lead roles.

The film is directed by Nagraj Manjule. The trailer of the film was dropped in January 2021. The film was postponed due to the pandemic, but now, the film is all set to release on big screens. Amitabh Bachchan will be seen playing the role of Vijay Barse in the biographical sports drama which was initially announced in February 2019. The film also marks Nagraj Manjule's debut in Bollywood. The film is produced by Bhushan Kumar, Raaj Hiremath, Krishan Kumar, Savita Raj Hiremath, Nagraj Manjule, Meenu Aroraa and Gargee Kulkarni in association with T-Series, Tandav Films Entertainment & Aatpat.

Meanwhile, on the professional front, Amitabh Bachchan will be next seen in Ayan Mukerji's directorial Brahmastra. The film features Ranbir Kapoor and Alia Bhatt in the lead roles. It also features Nagarjuna and Mouni Roy in pivotal roles. Brahmastra is slated to release in theatres on September 9, 2022.