Amitabh Bachchan Asked Fans To Guess His Co-Star In Film Still. The Answer 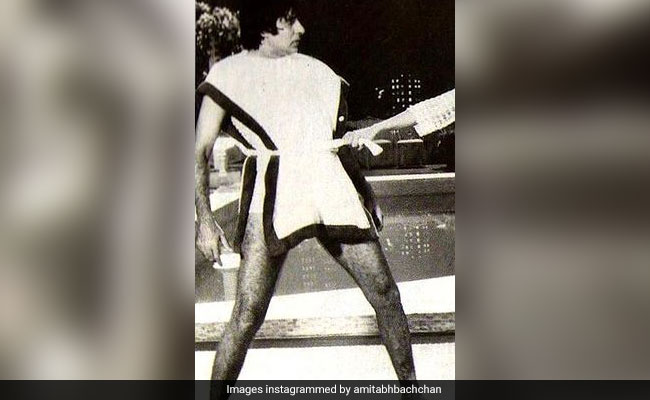 Whose hand, Amitabh Bachchan asked the Internet a day ago - he had posted a film still of himself with his co-star all but cropped out of it. All that remained of her or him (her, the photo evidence seemed to indicate) was a hand emerging from a sleeve. Big B invited his fans to identify the person on the other end of the sleeve, captioning the black and white still: "Bataiye kiska haath- whose hand is it?" The comments section was instantly flooded with guesses that ranged from Zeenat Aman and Parveen Babi to Rekha. The winning guess, however, came from filmmaker Farah Khan and some others - the answer is Sridevi.

"Inka haath hai. It was her hand - Sridevi. A few got it right," Amitabh Bachchan wrote in his follow-up post on Monday. He shared the full still, revealing Sridevi wearing a swimsuit under a gauzy cover-up.

The still is from Sridevi and Amitabh Bachchan's 1984 film Inquilaab - the scene is a swimming pool sequence, hence Big B's strange toga-like outfit which surely ranks right up there on the list of bizarre costumes he has worn like the Yaaraana's light bulb jacket. Inquilaab starred Big B as a police officer who is manipulated by politicians and ends up killing them; Sridevi co-starred as his increasingly horrified wife. Amitabh Bachchan and Sridevi, who died in 2018 at the age of 54, starred in films like Khuda Gawah and Raasta in addition to Inquilaab.

Amitabh Bachchan, 79, has a stacked lineup this year and next, including the long-awaited Brahmastra.