Amitabh Bachchan Will Host A Diwali Party After 2 Years: Reports

The guest list includes the creme de la creme of Bollywood such as Shah Rukh Khan, Ajay Devgn and Kajol and Akshay Kumar and Twinkle Khanna. 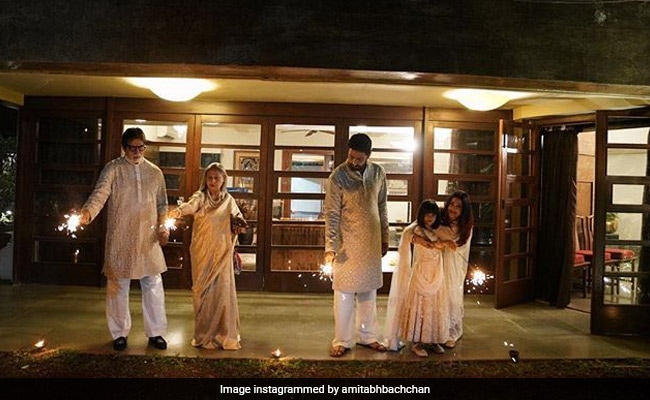 The Bachchans are all set to host their friends and colleagues from the film industry on Diwali this year, after a gap of two years. Several websites, including Filmfare and Mumbai Mirror, have reported that a grand Diwali party will be hosted by Amitabh Bachchan at his Mumbai bungalow Jalsa on October 27 and the guest list includes the creme de la creme of Bollywood such as Shah Rukh Khan, Ajay Devgn and Kajol, Akshay Kumar and Twinkle Khanna, Karan Johar, Sanjay Dutt, Ranbir Kapoor and Alia Bhatt. The Bachchans did not host a Diwali parties in 2017 - it was cancelled after Aishwarya Rai Bachchan's father Krishnaraj Rai died - and in 2018, after Shweta Bachchan Nanda's father-in-law Rajan Nanda died.

This year, Amitabh Bachchan's Jalsa bungalow is all set to light up with celeb arrivals and Diwali euphoria.

Meanwhile, Amitabh Bachchan was recently hospitalised for routine check-up and the actor returned home after spending three days in the hospital. The 77-year-old actor is hale and hearty and he has resumed the shooting of reality quiz show Kaun Banega Crorepati 11. He wrote on his official blog, "Yes... back to the grind... front foot forward, head down, consuming all the days' work and ready in dress and briefing for the KBC 'Karmveer' and a new cluster for the week... So jogging on to the set and the cheer and applause from the most loving audience as ever and all else is forgotten."

Apart from the Bachchans, Salman Khan's sister Arpita Khan Sharma is also reportedly hosting a Diwali bash on Sunday and so is Anil Kapoor. Fans and paparazzi can expect their favourite celebrities Diwali party-hopping over the weekend.