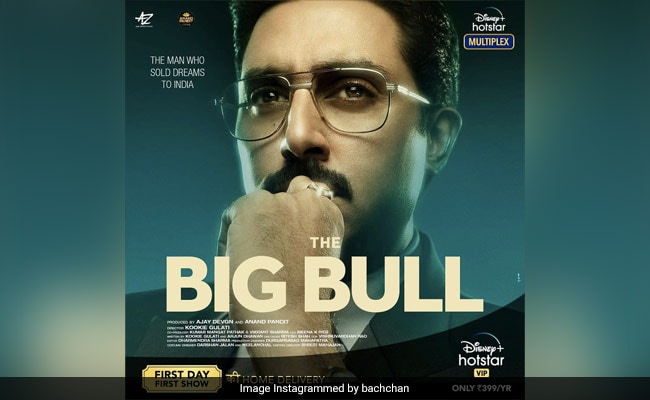 Abhishek Bachchan in the poster of The Big Bull.(Image courtesy: bachchan)

Megastar Amitabh Bachchan is all hearts for his son Abhishek Bachchan's upcoming film The Big Bull. Giving a big shoutout to his son's movie, Amitabh shared a fan post about the movie on Twitter. The fan post that Big B shared on Twitter constituted of two posters of The Big Bull featuring Abhishek Bachchan. The fan had also heaped praise on the actor as she wrote, "This one is gonna ROCK big time, Can't wait to watch #AbhishekBachchan rule the screen as the #TheBigBull. Best wishes to the Entire Team." Sharing the post on his Twitter feed, Amitabh wrote, "Love and wishes.. remember WHTCTW."

Big B's shoutout to his son comes just a day before the trailer release of his film The Big Bull. Abhishek had shared the teaser of the film on Instagram earlier this week and had announced that its teaser will be released on March 19. "Introducing The Big Bull... The mother of all scams!!! Trailer out on 19th March," he wrote in the caption of his post.

The Big Bull has been directed by Kookie Gulati and has been produced by Ajay Devgn. It stars Abhishek in the lead role. Abhishek's character in the film is loosely inspired from the stock-broker Harshad Mehta who was charged for several financial crimes during the securities scams of 1992. The film also stars Ileana D'Cruz in the role of a journalist. The financial drama was earlier slated to release on October 23 last year. It will now premiere on Disney+Hotstar on April 8th.

Besides, The Big Bull, Abhishek Bachchan will also be seen in Diya Annapurna Ghosh's Bob Biswas. He is currently busy with the shooting of Tushar Jalota's Dasvi.