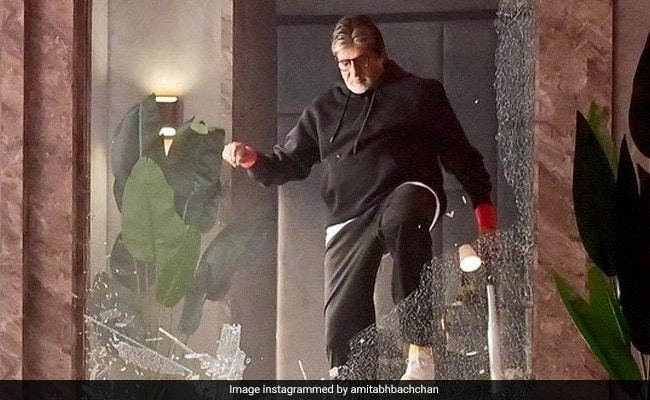 We can always bank on Amitabh Bachchan for a boost of inspiration. The actor continues to charm us with his charismatic appeal. Apart from his stellar on-screen acting skills, we have a lot many reasons to keep gushing about him. Guys, don't get fooled by Amitabh Bachchan's grey hairs. The veteran is still as fit as he used to be. Proof? Even at his age and after 53 years in Bollywood, the actor can pull off great action stunts for his films. Amitabh Bachchan has posted a photo where he is shutting a wall of glass with his foot. The caption read, "After 53 years and age 80...There are some things that never change...Action."

Want a boost of motivation in the middle of the week? Amitabh Bachchan's Instagram posts are more than enough for that. Recently, Big B posted a photo where he is walking through the threshold of a door. We see him stepping out in a blue hoodie and white trousers. On the door panel, we read the word "Push". As if taking a cue from this simple word, Amitabh Bachchan wrote, "You need to push a door if it does not open...And, enter." His granddaughter Navya Naveli Nanda commented with a raised-hand icon.

Amitabh Bachchan will be next seen in Nagraj Manjule's Jhund, Ayan Mukerji's Brahmastra and Sooraj R. Barjatya's Uunchai, among other films.