Amitabh Bachchan said: "I am so authoritative that their parents dare not oppose me 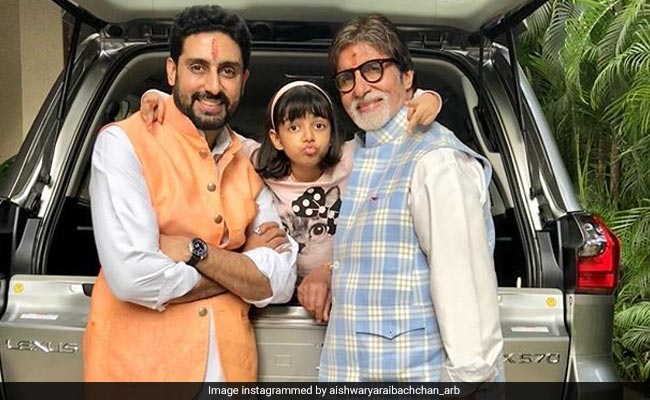 Amitabh Bachchan says his granddaughter Aaradhya often "destroys his working desk" and he just "loves" it, reported news agency IANS. Mr Bachchan, who is a busy star, said on an episode of Starry Nights 2.Oh! that it's all A-OK if Aaradhya wants to upset his work station. "Aaradhya will still come and destroy my working desk, as she wants to use this pen and wants to write things and wants to play with the laptop. It brings immense joy and is a beautiful experience," the 102 Not Out actor said.

Amitabh Bachchan says that he wants to spoil all his grandchildren. Aaradhya, who is all of 6, is the daughter of his son Abhishek (married to actress Aishwarya Rai Bachchan) while Mr Bachchan's daughter has a daughter Navya Naveli, 21, and a son Agastya, 18. "I've loved all of them. When I want to spoil my grandkids, I am so authoritative that their parents dare not oppose me," he added.

He also talked about his daughter-in-law Aishwarya Rai Bachchan, with whom he has made films such as Mohabbatein and Khakee. When asked if the family dynamics changed after Aishwarya joined the Bachchans, Big B said: "Nothing has changed for us, it was like one daughter left and another one came in."

On the work front, Amitabh Bachchan was last seen in Badla and he will next be seen in Brahmastra with Ranbir Kapoor, Alia Bhatt, Mouni Roy and Akkineni Nagarjuna. The film is directed by Ayan Mukerji and it is slated for Christmas 2019 release.