The Tiger Shroff Effect: Amitabh Bachchan Did The Kicks For Instagram "Likes"

There is a reason Amitabh Bachchan is the Shahenshah of Bollywood 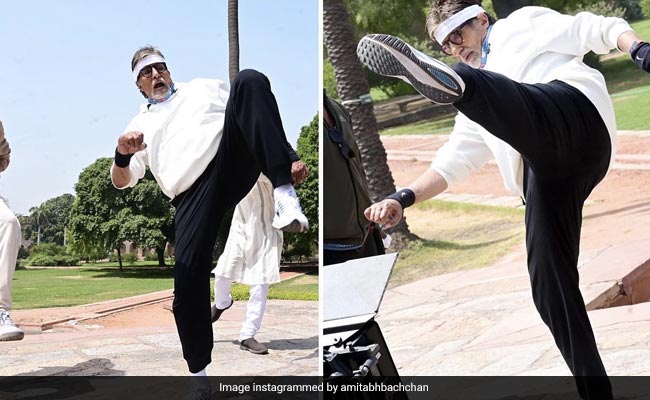 Is there anything the legendary Amitabh Bachchan cannot do? Ever since his debut in the 1970s, the actor has ruled the hearts of cinema lovers across the world. Even today, the superstar continues to be one of the busiest actors in the country. In addition to films, Big B – as he is fondly called – also enjoys a massive presence on social media. Amitabh Bachchan– who is known for being Internet savvy – surprised fans on Thursday when he shared a collage of pictures in which he is performing kicks. His Uunchai co-star Boman Irani is watching the veteran actor in awe.

In the caption, Amitabh Bachchan said that he was inspired by Tiger Shroff to attempt the kicks. For the unversed, Tiger Shroff is known for his sleek action moves and acrobatic skills. In the caption, he said, “Seeing Tiger Shroff getting all those "like" numbers through his flexible kick abilities, I thought I would also give it a try, in the hope of getting even a small percentage of ‘likes.” Well, there is a reason Amitabh Bachchan is called the Shahenshah of Bollywood and no amount of likes is going to change that.

In the comments, Big B's son, actor Abhishek Bachchan replied with a tiger and biceps emoji. The legend's granddaughter Navya Naveli Nanda dropped laugh and clap emojis. Actor Rohit Bose Roy said, “Amit ji the day someone comes even close to the Aakhri Rasta kick to break down the door, I'll retire and move to the mountains.”

Tiger Shroff has reposted the message and was, not surprisingly, honoured by the compliment from Amitabha Bachchan. "Ok…had to take this opportunity and show off a little when the greatest star of our country and the greatest action hero had some generous words for me," he said. "On a serious note, Sir, if I still can kick like you even a few years later, it will be a blessing," Tiger Shroff added, along with the hashtags "legend", "Mr Bachchan" and "blessed".

A week ago, Amitabh Bachchan shared another candid picture of himself. Dressed in a semi-formal ensemble, the actor looks dapper in the black and white emoji. “Stepping out into the old world charm of Daryaganj, Delhi... The renown of its exquisite eatery - Moti Mahal and apparently still the same excellence.”

Coming back to Uunchai, Amitabh Bachchan shared another still from the film in which he is grooving with co-stars Danny Denzongpa, Boman Irani and Anupam Kher. Sharing the photo, the legend said, “And, still trying to groove…”

In addition to Uunchai, Amitabh Bachchan will be seen in a bunch of upcoming projects including Runway 34, Brahmastra, Good Bye, and Project K, among others.

Samantha Ruth Prabhu Is In The US for Her Project Citadel