Amitabh Bachchan time-travelled 40 years in the past, revisited the sets of Seventies' blockbuster Amar Akbar Anthony and remembered the time when his children dropped by to visit 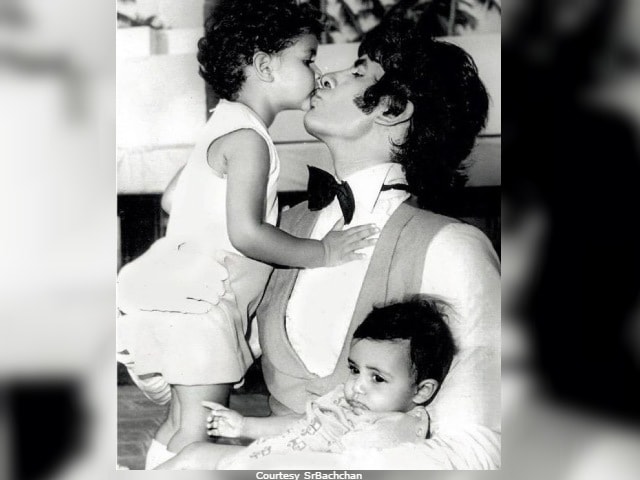 New Delhi: Throwback Thursday is passe. Amitabh Bachchan dug up gold from the past and shared it with his fans on the start of the weekend. Thank you Big B, for this amazing photograph of Abhishek and Shweta from when they were young. Big B time-travelled 40 years in the past, revisited the sets of Seventies' blockbuster Amar Akbar Anthony and remembered the time when his children dropped by to visit. In the picture, Shweta, who is two years elder to Abhishek, adorably kisses Big B, who was dressed as Anthony Gonsalves - the character he played in the film. Abhishek, now 41, is safely cradled in his father's arms in the black and white memory. "40 years of Amar Akbar Anthony...and Shweta and Abhishek visit me on the set when I was doing song "My Name Is Anthony Gonsalves," Mr Bachchan wrote on Twitter. The megastar famously featured with Rishi Kapoor and late actor Vinod Khanna in the Manmohan Desai-directed film.

Blast from the past!

T 2436 - 40 years of Amar Akbar Anthony .. and Shweta and Abhishek visit me on the set when I was doing song 'my name is Anthony Gonsalves pic.twitter.com/bNq8kBTSf7

A visit to Amitabh Bachchan's social media accounts is always delightful - the 74-year-old actor is virtually active and loves to share glimpses of his family. He recently posted a picture of Aishwarya Rai Bachchan and granddaughter Aaradhya from Cannes, which swiftly went viral. Aishwarya and Abhishek celebrated their 10th wedding anniversary this year.

Promoted
Listen to the latest songs, only on JioSaavn.com
Mr Bachchan also shared a sneak peek of what goes down in Jalsa when he meets his fans every Sunday but what caught our eye is the heart-warming moment when Big B waved out to Shweta, who was at the door to see him off. There was Abhishek waiting to leave for work with his father on the other side of the frame.

Sunday well wishers .. and the best wave and smile for the daughter SHWETA ..

T 2424 - Sunday well wishers and a surprise vision of Shweta at the back recording the moment .. and Father and Son out for an event !! pic.twitter.com/2x4MV7pOWw

Amitabh Bachchan is currently part of script reading sessions for Thugs Of Hindostan, his film with Aamir Khan. He will also make a comeback with his Amar Akbar Anthony co-star Rishi Kapoor in a film titled 102 Not Out. Ram Gopal Varma's Sarkar 3 remains his last film.