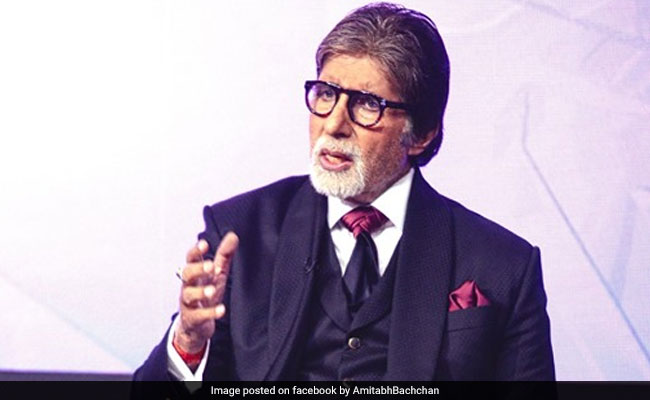 Amitabh Bachchan at a press conference in Mumbai. (courtesy amitabhbachchan)

Actor Amitabh Bachchan's tweet supporting the Mumbai metro on Wednesday upset several social media users and people protesting the government's decision to cut down 2,700 trees in Aarey Colony to accommodate a proposed Metro car shed project. Mr Bachchan tweeted, "Friend of mine had a medical emergency, decided to take metro instead of his car. Came back very impressed said was faster, convenient and most efficient. Solution for pollution. Grow more trees, I did in my garden. Have you?" Though Mr Bachchan doesn't name Aarey Colony in his tweet, social media users interpreted his post in the context of the deforestation of Aarey Colony. Several activists assembled and protested outside Mr Bachchan's Mumbai home on Wednesday, reported news agency IANS.

Many Bollywood celebrities like Shraddha Kapoor, Katrina Kaif and Arjun Rampal among others have campaigned against the cutting down of trees in Aarey Colony. Former Central Board of Film Certification member Ashoke Pandit, who is among the celebrity activists protesting the massacre of Aarey Colony, tweeted, "Respected Amitabh Bachchan sir. We as activists fighting to #SaveAarey would like to know whether this tweet means that you support #MetroCarshed at Aarey? Why Massacre 2,700 fully grown trees when one has alternatives. Development at the cost of nature is dangerous to mankind."

Respected @SrBachchan Sir. We as activists fighting to #SaveAarey would like to know whether this tweet means that U support #MetroCarshed at Aarey ? Why Massacre 2700 fully grown trees when one has alternatives. Development at the cost of nature is dangerous to mankind. https://t.co/60qvftELhi

Another Twitter user wrote, "What if a patient dies in #Metro or he isn't able to spend on fares @MMRDAOfficial. Instead provide hospital which serves the tribesmen of #AareyForest free. Be on the side of humanity Amitabh Bachchan, because wealth doesn't sustains throughout the whole life #Mumbai #AareyAiklaNa."

IANS also reported that in 2010, Mr Bachchan was against the metro construction when a rail line was expected to be laid near his bungalow Prateeksha. At that time Mr Bachchan wrote on his bog, "It is finally happening. The metro rail being laid over the metropolis called Mumbai, some under the ground, some above over large tracts of cement structures is taking shape. There is general happiness from the commuters, for, the misery of crowded locals and the uncertainties of the three-wheeler or the yellow black cab shall hopefully be greatly reduced. But here is the killer... its going to roll over Prateeksha!"

On the work front, Mr Bachchan is currently hosting the ongoing season of Kaun Banega Crorepati and his upcoming films are Sye Raa Narasimha Reddy, Brahmastra and Chehre.