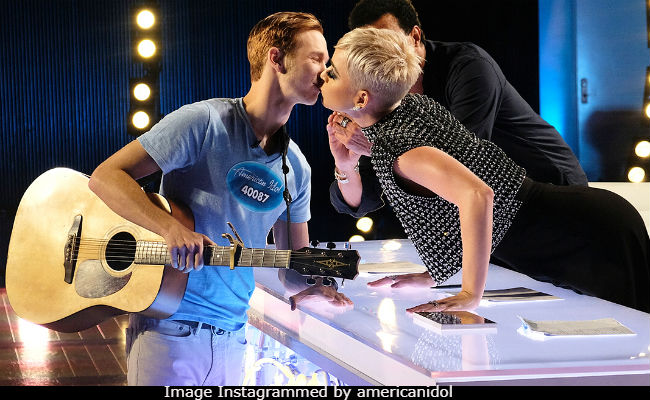 "You got a face like Chet Baker. Very good-looking," Perry said approvingly to the contestant. Then she smirked, looking away and rolling her eyes knowingly.

"Look at her!" Bryan exclaimed. Richie asked, "Will you stop flirting now?"

Perry ignored them. "It's kind of like this sweet little sexy thing that you've got going on," she told Brenns. She agreed with Bryan's assessment that teenage girls would love him. "Eighteen-year-old girls would eat this up! If a 32-year-old cougar would eat it up . . ." Perry, 32, trailed off.

The scene was presented in good fun, as Richie and Bryan thought it was hilarious and the show promoted Brenns's audition as an "'American Idol' showmance." But as this continues a pattern of Perry flirting with male contestants, how will the pop star's behavior play out in a culture that is now hyperaware of power dynamics in Hollywood?

Perry briefly caused an internet storm after last week's premiere of the costly revival of the hit Fox series that now airs on ABC, during a scene that seemed out of place in the #MeToo era. In the episode, 19-year-old contestant Benjamin Glaze told the judges he had never kissed a girl before. Perry motioned for him to give her a peck on the cheek - only to turn her face at the last second and kiss him on the lips.

Glaze toppled over in surprise as Bryan and Richie howled with laughter and gave Perry high-fives. Glaze, who took the moment in stride, later told the New York Times that he was a "tad bit uncomfortable" because he wanted to save his first kiss for his first relationship.

Though "Idol" heavily promoted that moment leading up to the premiere, some viewers weren't amused - pointing out that the same situation between a 30-something male judge and 19-year-old female contestant would not have been played for laughs. (Sample comment on Twitter: "Anyone else watching 'Idol' feel like Katy Perry pressured that poor kid into letting her kiss him on the cheek and violated him by planting one on his lips? Would not have been okay for a male celebrity to do to a young girl. #americanidol #katyperry #mencanbesexuallyharassedtoo")

An ABC spokesperson declined to comment, and Perry's publicist did not return a request for comment. However, as the situation spiraled last week, Glaze took to Instagram to clarify that "I do not think I was sexually harassed by Katy Perry and I am thankful for the judges comments and critiques." He also reiterated to "Entertainment Tonight": "I was only uncomfortable because it was just my first kiss. I'm not upset about it, I'm glad that it happened."

On the second night of "Idol's" two-part premiere last Monday, the show really leaned into Perry's flirtatious side. The episode featured an audition with 27-year-old construction worker Trevor Holmes, who admitted that Perry was his celebrity crush. The feeling became mutual when Holmes appeared in front of the judges. Bryan labeled him a "dreamboat" while Perry went with, "You're so hot."

Holmes laughed, and Perry offered, "If you're not going to Hollywood, maybe you could just come hang out with me in L.A." She also managed to make "He's in construction, so he's got lots of tools," sound like an innuendo. Richie and Bryan egged her on, especially when Holmes revealed his girlfriend was waiting outside.

Perry could barely keep it together as Holmes crooned a love song, and the camera zoomed in on her dreamy expression. When Holmes landed a ticket to Hollywood, things devolved into chaos as his girlfriend ran into the room, which sent Perry literally bolting in the opposite direction. Again, it was showcased as a highlight of the show.

"One of the best moments [of 'Idol'] so far is that so-called love triangle involving Katy Perry, a handsome contestant named Trevor and Trevor's girlfriend named Sierra," Michael Strahan gushed on Good Morning America Wednesday before interviewing the good-natured couple. Sierra explained, "We had so much fun, and Katy and I hugged and we laughed about it. I even told her we could share him."

"Idol" producers and the network seem excited to treat Perry's shtick as a joke. Same with the contestants - but then, do they really have a choice? That gets into the power dynamics issue that the entertainment industry has been forced to confront over the last several months. As a result, it can become more uncomfortable to watch auditions such as the one starring 26-year-old William Casanova: Although he and Perry had an entertaining rapport, he had to retrieve his ticket to Hollywood from between Perry's toes after she found out that he was a shoe salesman.

In an essay for Slate, Christina Cauterucci noted the lighthearted framing of Perry's behavior might make sense for the network, but it feels like an odd choice. "Of course, Perry's flirtation isn't truly sexual at all. It remains in the realm of PG-rated jest - this is family television, after all," she wrote. Still, she added of Glaze's audition, "The scene feels even more lewd and exploitative post-#MeToo than it would have last March. ABC's decision to treat it as a playful, feel-good moment - and use it to advertise the show - is bafflingly obtuse."

(This story has not been edited by NDTV staff and is auto-generated from a syndicated feed.)
Comments
katy perryamerican idol