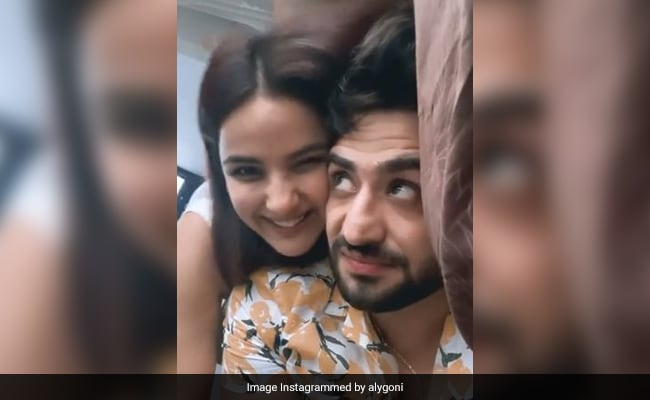 Aly Goni and Jasmin Bhasin occupied a spot in the list of trends on the Internet today. Reason? An adorable video of the couple, which is a treat for their fans. In case you are not following Aly Goni's Instagram handle, the TV couple recently opted for the 'Runaway Aurora' filter challenge. It is one of the most popular trends on Instagram these days that gives a silhouette filter against the backdrop of a starry sky. Aly Goni and Jasmin added their charm to the challenge and it is all about being "lazy". On Sunday, Aly Goni posted a video of their version of the 'Runaway Aurora' challenge in which he can be seen snuggling with his girlfriend Jasmin on their bed. We couldn't miss Aly Goni's hilarious expressions as Jasmin hugs him from behind.

While Aly Goni's goofy video with Jasmin Bhasin is fun to watch, his hilarious caption also deserves your attention. Talking about the viral challenge, he wrote, "Bohot socha bahar jaake sab ki tarah pose maarenge with nice view but hum dono lazy hai toh yehi ho paaya humse dekhlo (We thought a lot about going out and posing together with a nice view like everyone, but we both are lazy. We were only able to do this)."

Jasmin reacted to his post in the comment section. She wrote, "Hahahaha, you posted this without asking me." To which, Aly Goni replied, "Bina puche cheeze karne ka mazza hi kuch aur hai (It's fun to do without taking permission)."

For the uninitiated, Runaway, the song by singer Aurora was released in 2015. It went viral as a filter challenge on Instagram this year.

Coming back to Aly Goni and Jasmin Bhasin, the couple has been dating each other for quite some time now. Both of them frequently posts their loved-up pictures on their respective Instagram handles.

Take a look at some of their posts here.

Aly Goni and Jasmin Bhasin participated together in Bigg Boss 14 last year. They also appeared in Khatron Ke Khiladi 9. Paparazzi often spot them together in public.