Sunny Singh said, "I saw the similarity but that's not my call. I haven't directed it, I am not the maker." 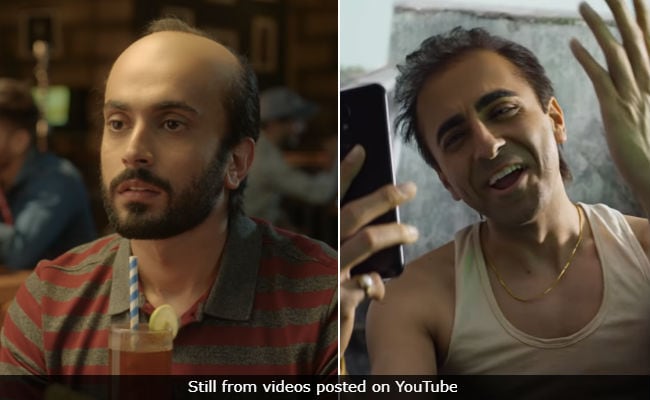 Sunny in Ujda Chaman and Ayushmann in Bala. (Images by Panorama Studios and Maddock Films)

A lot has been written about the similarities between upcoming Bollywood films Bala and Ujda Chaman, however, the lead actor of the latter Sunny Singh says that he is not affected by the comparisons and added that he loved the trailer of Bala, starring Ayushmann Khurrana, reports news agency PTI. Sunny Singh, best-known for his roles in Sonu Ke Titu Ki Sweety and Pyaar Ka Punchnama 2, said that it's "all cool" between him and Ayushmann, both of whom play the roles of dealing with premature balding. "I am away from all of this. I am doing a film. I am also getting to know that this film (Bala) is kind of similar. Initially you feel like, 'Why and how is this happening?' But then you feel it's okay. He's playing his part, I am playing mine. We both are actors doing our jobs. I love him and I'm a fan of his acting," Sunny told PTI.

"I know Aparkshakti (Ayushmann's brother Aparshakti Khurana) and Tahira (Ayushmann's wife Tahira Kashyap) too, so it's all cool. People might also feel that way (comparisons) because it's trending but personally, an actor is chilling and thinking only about his movie. Even if they compare, the makers know both have put in their best. Which film works at the box office is another thing. I am only concerned about the respect from the audience and makers. Comparisons with him won't bother me," Sunny Singh added.

Ujda Chaman, directed by Abhishek Pathak, is the Hindi remake of 2017 Kannada movie Ondu Motteya Kathe while Amar Kaushik-directed Bala is reportedly an original story. Both films have similar plots, in which the protagonist is dealing with the effects of premature balding on his personal and professional lives.

Speaking of the trailer of Bala, the Ujda Chaman actor said, "I liked the trailer because I was only looking at Ayushmann. He is super good and does it nicely. People have a different way of doing it. I saw the similarity but that's not my call. I haven't directed it, I am not the maker. I didn't have an idea that what I am doing will be like that. We just did our work."

Ujda Chaman releases on November 8, a day after Bala will open in cinemas.