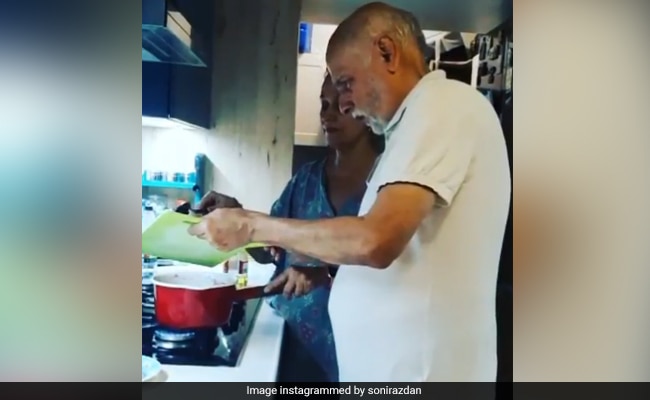 Mahesh Bhatt And Soni Razdan in a still from the video. (Image courtesy: sonirazdan)

Mahesh Bhatt and Soni Razdan channeled their inner chefs on Saturday and their actress daughter Alia Bhatt couldn't be more surprised. Soni Razdan shared a glimpse of their cooking session on social media and added a dash of humour to the caption. In the video, Soni Razdan and Mahesh Bhatt can be seen putting what appears to be veggies from a chopper board to a pan and stirring it. However, sharing the clip, Soni Razdan hilariously explained that they weren't actually cooking but just "stirring here and there." Here's the story behind Soni Razdan's post: "Cooking classes in progress ... umm just don't imagine we did any actual cooking. A few stirrings here and there. And they want to put it on Tik Tok. Have strictly forbidden it."

Cooking classes in progress ... umm just don't imagine we did any actual cooking A few stirrings here and there. And they want to put it on tik tok . Have strictly forbidden it

Soni Razdan married to filmmaker Mahesh Bhatt in 1986. The couple are parents to Alia Bhatt and Shaheen, who launched a book on her battle with depression in 2018. Soni Razdan has featured in a number of films such as such as Trikaal, Page 3, Khamosh, Monsoon Wedding, 36 Chowringhee Lane, Ahista Ahista, Khamosh, Gumrah, Saathi, Shootout at Wadala, Yours Truly, The Verdict - State vs Nanavati and War.

Mahesh Bhatt is a director, producer as well as a screenwriter. He has worked on several critically-acclaimed films like Saaransh, Naam, Kabzaa, Awaargi, Aashiqui and Dil Hai Ki Manta Nahin. He has produced films such as Papa Kehte Hai, Tamanna, Dushman, Zakhm, Sangharsh, Gunaah and many others.