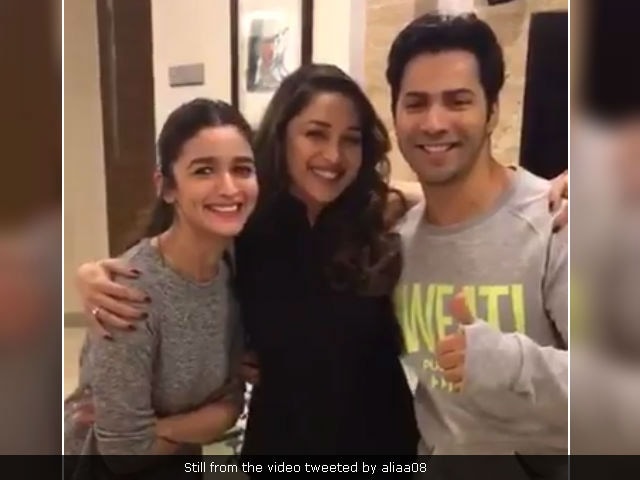 Alia and Varun will dance to Madhuri's song in their film. (Image courtesy: aliaa08)

New Delhi: Actors Alia Bhatt and Varun Dhawan were in a spot of trouble while rehearsing their moves for a song sequence in the their upcoming film Badrinath Ki Dulhania. Luckily for them, they had expert help. Badrinath Ki Dulhania contains a remix (yet another remix!) of the song Tamma Tamma Loge from 1990 film Thanedaar, starring Madhuri Dixit and Sanjay Dutt. As video tweeted by Alia indicates, Badrinath and his Dulhania were having trouble mastering the fancy footwork the choreography involves. Enter Madhuri Dixit herself, she of the original Tamma Tamma - probably drafted in by Badrinath Ki Dulhania producer Karan Johar who co-judged Jhalak Dikhhla Jaa with her. With Madhuri to show them how, Alia and Varun danced to conquer - though it does look like the moves came easier to Varun (sorry, Alia). That's no reason to ask Madhuri to rate the younger actress' prowess out of 10 - bad Varun!

Here's how it went down:

Madhuri Dixit's response to this dance SOS was, of course, a neat bit of PR but it's true that the Tamma Tamma Loge moves are quite intricate and requires skills. The six-and-a-half minute sequence posed no challenges for Madhuri, an accomplished dancer, but Sanjay Dutt was utterly defeated. Bollywood lore has it that despite Sanjay Dutt practicing the routine for a month, Javed Jaffrey had to double for him in some bits, notably the part they dance Michael Jackson-style using chairs as props. Choreographer Saroj Khan has revealed that the song took some 40-odd takes to film.

Promoted
Listen to the latest songs, only on JioSaavn.com
Watch the original Tamma Tamma Loge: