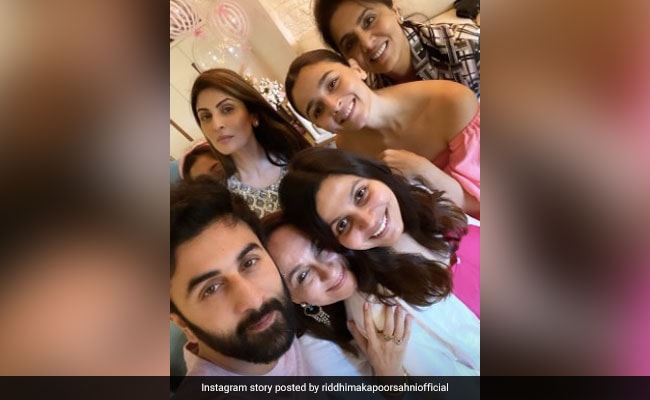 Alia Bhatt had a few pecial guests at her mom Soni Razdan's birthday celebrations on Sunday. Alia's boyfriend, actor Ranbir Kapoor and his family joined Soni Razdan's birthday gathering at the Bhatt residence, glimpses of which have been shared on Instagram by Alia and her sister Shaheen. One photo, featuring the Bhatts and the Kapoors, has gone particularly viral after Ranbir's sister Riddhima shared it as an Instagram story. In the photo, Soni Razdan is sandwiched between Ranbir and Shaheen while Alia can be seen posing with Ranbir's mother Neetu and sister Riddhima Kapoor Sahni. Riddhima's daughter Samara was also part of the festivities.

Here's how much fun the Kapoors had at Soni Razdan's birthday party. 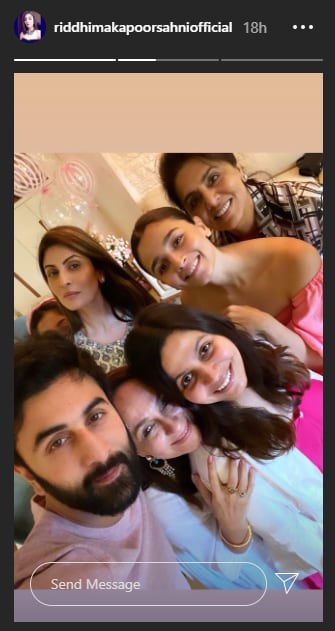 Earlier on Sunday, Alia and Shaheen had filled up their Instagram with birthday greetings dedicated to mom Soni Razdan. "They say - when you're looking at your mother you're looking at the purest love you'll ever know. Happy Birthday Maa .. I love you so so much," wrote Alia while Shaheen shared a throwback and wrote: "Happy Birthday to the moral, emotional and geographical centre of our family. I love you."

A mother is the truest friend we have, when trials heavy and sudden fall upon us; when adversity takes the place of prosperity; when friends desert us; when trouble thickens around us, still will she cling to us, and endeavor by her kind precepts and counsels to dissipate the clouds of darkness, and cause peace to return to our hearts. - Washington Irving Happy Birthday to the moral, emotional and geographical centre of our family. I love you.

Meanwhile, Alia gave a massive shout-out to Shaheen for making Soni Razdan's birthday special with a party: "Special mention to the fabulous sister duo for pulling off a successful celebration."

Soni Razdan's birthday was all about love and family:

Alia Bhatt and Ranbir Kapoor are regular guests at each other's family get-togethers. Alia made Riddhima's birthday special with a dance video in September. Alia, Shaheen and Soni Razdan were also part of Neetu Kapoor's birthday celebrations in July. Alia was constantly spotted with Ranbir Kapoor and his family following the death of his father, veteran actor Rishi Kapoor.