The Brahmastra co-stars flew out of Maximum City on Thursday and soon after, were spotted shooting for the film on the ghats of Varanasi. 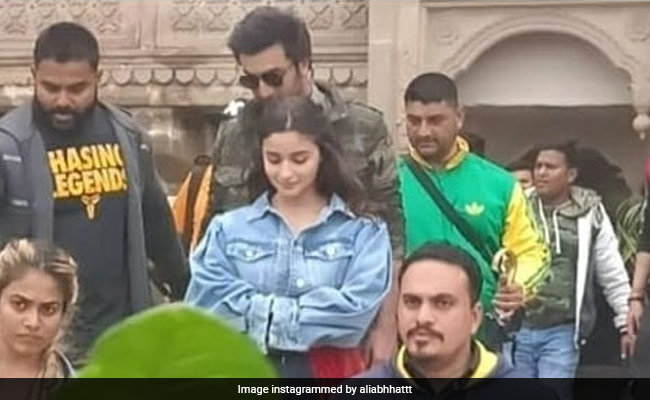 Alia and Ranbir in Varanasi for Brahmastra (courtesy aliabhhattt)

Alia Bhatt and Ranbir Kapoor have picked up their Brahmastra schedule in Varanasi from where they had left off in July. The Brahmastra co-stars flew out of Maximum City on Thursday and soon after, were spotted shooting for the film on the ghats of Varanasi. Looks like they began their schedule with a dance sequence and glimpses of the dance shoot have been shared by fans on social media. In the fan-club videos, Ranbir and Alia can be seen matching steps together to a peppy number. Ranbir, who plays the protagonist in Brahmastra, can be seen smartly dressed in casuals while Alia joins him in a brightly coloured cape paired with denims. Check out the videos from the sets of Brahmastra in Varanasi.

Brahmastra is being made as an epic trilogy, in which Ranbir is Shiva, who can emit fire from his hands as a superpower. Alia Bhatt plays his love interest Isha. Actors Mouni Roy and Saurav Gurjar are the antagonists in the film. A major chunk of the film has been shot in Varanasi as Shiva's quest for the Brahmastra takes him to the ghat of the Ganga, where he will bump into an archaeologist, played by actor Nagarjuna.

Brahmastra also stars Amitabh Bachchan, who reportedly plays Shiva's mentor in the film. Shah Rukh Khan has been roped in for a cameo, which he's already shot for. Directed by Ayan Mukerji, Brahmastra is slated to hit screens in May 2020. This film marks Alia Bhatt and Ranbir Kapoor's first project together.