Comments of encouragement poured in from the likes of niece Karisma Kapoor, Ranbir's girlfriend Alia Bhatt and her sister Shaheen 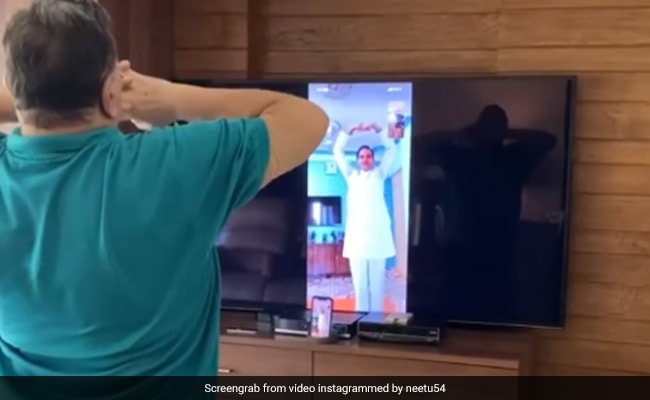 Rishi Kapoor in a still from Neetu's video (courtesy neetu54)

Rishi Kapoor, who underwent cancer treatment in New York for a year, is now into yoga. Neetu Kapoor shared adorable glimpses of the 67-year-old actor doing "virtual yoga" at home on Instagram and wrote in the caption: "Stay home, stay healthy!" as a precautionary measure against coronavirus. Looks like Neetu and Rishi Kapoor have been assigned the challenge to practise fitness at home by their son-in-law Bharat Sahni, who is married to Ranbir Kapoor's sister Riddhima Kapoor Sahni. "We accept the challenge," wrote Neetu Kapoor foe the video, in which Rishi Kapoor can be seen doing yoga by following steps on the television.

Meanwhile, comments of encouragement poured in from the likes of niece Karisma Kapoor, Ranbir's girlfriend Alia Bhatt and her sister Shaheen. "Superb," wrote Alia along with the red heart emojis and started a conversation with Neetu, who responded with the "work hard" icon. She also responded to Shaheen's comment with the same icon. 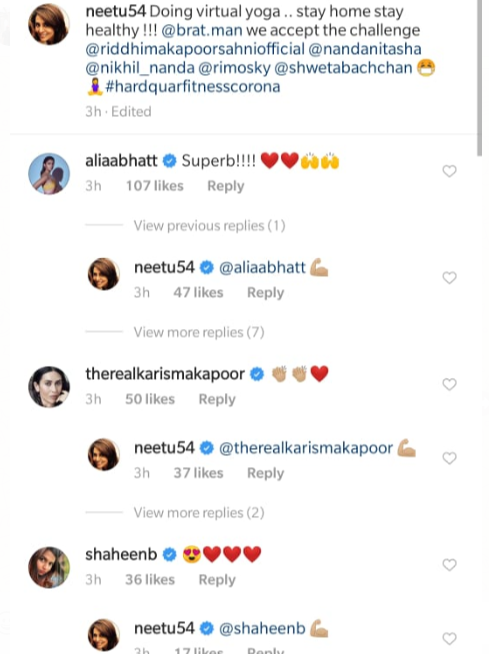 Here's how Rishi Kapoor will motivate you to work-out at home this week.

Meanwhile, here's how Alia Bhatt is spending her time when in quarantine. "Stay home and finish a book," she wrote. Alia recently celebrated her 27th birthday this year.

Alia Bhatt and Ranbir Kapoor came out as a couple at the Filmfare Awards last year, when she sent him a flying kiss and called him "the special one." Alia is often part of the Kapoors' family events. Alia and Ranbir are also working on a film together - Brahmastra - which has reportedly been posted due to coronavirus. In India, over 200 positive cases have been detected.