Ali Fazal mourned the loss of his grandfather on social media 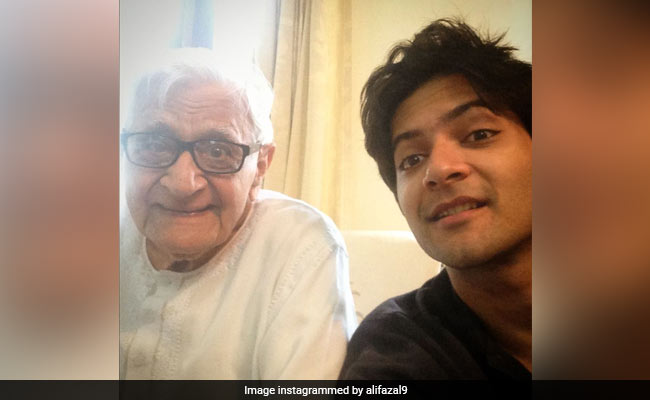 Ali Fazal's grandfather died on Saturday. Last night, the actor mourned the loss of his grandfather on social media. Ali Fazal posted a few throwback pictures with his grandfather on the platform and wrote an emotional note as he bids farewell to him. In his note, the Mirzapur actor remembered how his grandfather took care of him. "He fathered me. He took me in from when I can remember because my parents were living separate lives. While my father was out somewhere in the Middle-East, it was Nana who smothered me with love," read an excerpt from Ali Fazal's post.

Informing his Instafam about the loss, Ali Fazal shared that his grandfather died in less than a year of his mother's death. "I suppose this is the will," he wrote. "As I bid him farewell, I say goodbye to another version of me again," the actor added. Ali Fazal also shared his grandfather wanted him to "crack a joke on his funeral." He wrote, "I left a small chit in the grave that said: say cheese..."

Ali Fazal's girlfriend and actress Richa Chadha reacted to his post. Richa dropped a few broken heart emojis and wrote, "Nana" as she remembered him.

Manjot Singh, who worked with Ali Fazal in the Fukrey franchise, also posted condolences in the comment section. He wrote, "Bhai" and added a flower emoji.

Ali Fazal's mother died due to health complications last year. On June 17, the actor posted a picture of his mother on Twitter and wrote a heart-wrenching note for her. He wrote, "I'll live the rest of yours for you. Miss you Amma. Yahi tak thaa humaara, pata nahi kyun (Our journey was till here). You were the source of my creativity. My everything. Aagey alfaaz nahi rahe (Don't have words beyond this). Love, Ali."

I'll live the rest of yours for you. Miss you Amma. Yahi tak thhaa humaara, pata nahi kyun. You were the source of my creativity. My everything. Aagey alfaaz nahi rahe. Love, Ali. pic.twitter.com/hKyFMp6U1G

In terms of work, Ali Fazal was last seen in Amazon Prime Video's web series Mirzapur: Season 2 in 2020. He now has Fukrey 3, the third installment of the Fukrey franchise coming up. The actor worked in both Fukrey and Fukrey Returns. Ali Fazal will also be seen in an upcoming Hollywood filmDeath On The Nile in 2022.