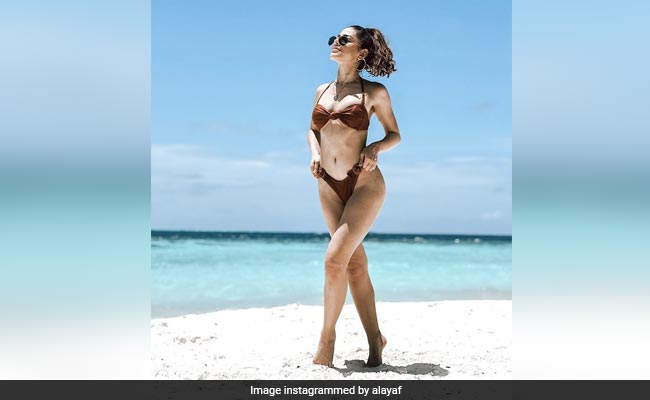 Alaya Furniturewalla is in Maldives and she couldn't be more delighted to be there. Alaya, who is a beach person, (going by her caption), shared a set of pictures from her holiday, in which she can be seen chilling on the beach, dressed in a brown bikini. "I've realised, I'm definitely a beach person," she captioned her post. The actress began the week by sharing a picture-perfect shot and she wrote: "Ufff I just love a good tan." Alaya Furniturewalla has been sharing stunning pictures from her vacation - one post at a time. Also, she is giving us major beachwear fashion goals.

The actress checked into the island nation by sharing this picture on Instagram: "Incase you can't tell from the photo, I'm really happy to be her," read her caption. This is the post we are talking about:

Alaya will next be seen in Freddy, co-starring Kartik Aaryan. She wrapped the schedule of the film and wrote in an Instagram post: "Ready, steady, Freddy! It's a wrap! The most wonderful set with the most wonderful people! Feeling super blessed and super grateful to be a part of this incredibly special film."

Alaya Furniturewalla is the daughter of Bollywood actress Pooja Bedi and her ex-husband Farhan Furniturewalla. Alaya made her debut in Bollywood with Jawaani Jaaneman, which released in January last year. Alaya co-starred with Saif Ali Khan and Tabu in her first ever Bollywood movie, which opened to largely positive reviews from film critics as well as audiences. She also won a Filmfare Award for her debut film.