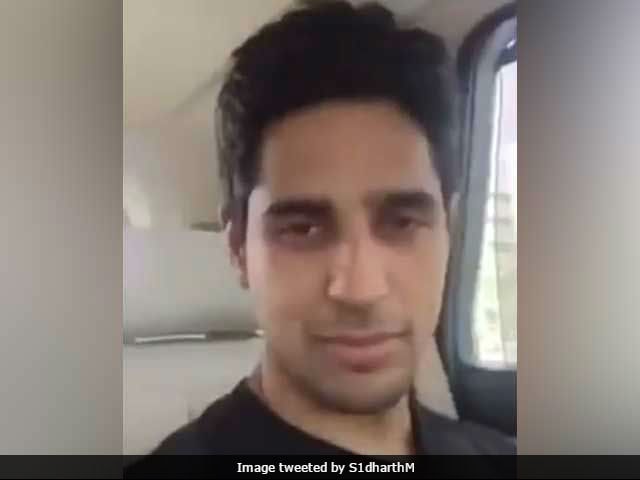 A still from the video posted by Sidharth Malhotra (Image courtesy: S1dharthM )

New Delhi: Akshay Kumar and Bhumi Pednekar's much-awaited film Toilet: Ek Prem Katha is all set to release this Friday and best wishes have been pouring in for the stars for the success of their film. After a promotional gig from Ranveer Singh and Varun Dhawan, Sidharth Malhotra posted a hilarious video on social media in support of Akshay's forthcoming film. Sidharth and Akshay made a video inspired by comedian-actor Gaurav Gera's popular Shopkeeper-Chutki series of jokes and it is sure to make you ROFL. "Glad you finally found your toilet brother! Only 2 days to go, good luck to @akshaykumar @psbhumi n team #throwback video #ToiletEkPremKatha," tweeted the Ek Villain actor.

Sidharth Malhotra and Akshay Kumar have co-starred in 2015 movie Brothers.

When you gotta go, you GOTTA GO! #ToiletEkPremKatha this Friday! @akshaykumar @psbhumi

Toilet: Ek Prem Katha has been directed by Shree Narayan Singh and co-produced by Akshay Kumar and Neeraj Pandey.

The film deals with the need of sanitization and addresses the problem of open defecation in India. It supports Prime Minister Narendra Modi's Swacch Bharat campaign.

Promoted
Listen to the latest songs, only on JioSaavn.com
Recently, Akshay Kumar and Bhumi Pednekar, in collaboration with Caya Constructs, unveiled 24 toilets in 24 hours across India. The Airlift actor shared a video on his Twitter account which read, "#24Hours24Toilets unveiled across India to join the fight against open defecation! #GoingODF @toiletthefilm @CayaConstructs."

#24Hours24Toilets unveiled across India to join the fight against open defecation! #GoingODF@toiletthefilm@CayaConstructspic.twitter.com/PBdLtrMVP1

In May, the team of Toilet: Ek Prem Katha met Prime Minister Narendra Modi and Railway Minister Suresh Prabhu and briefed them about the film.